TRAGEDY: Plane With 157 People on Board Crashes Minutes…

Attack On Ekweremadu, An Indication That People Are Not… 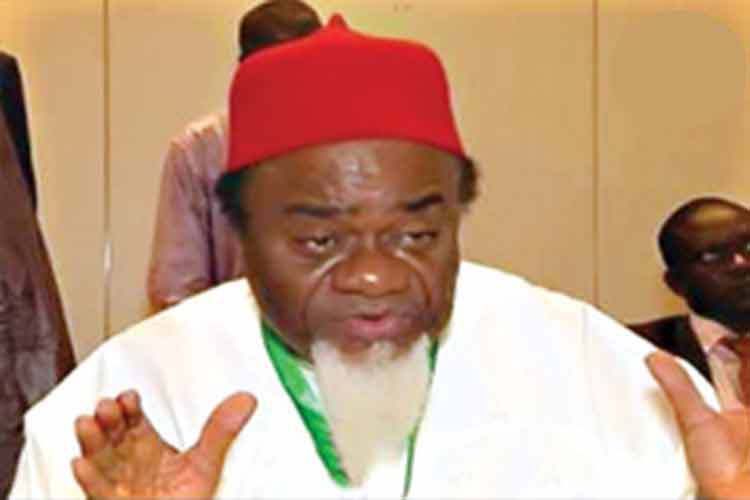 Ohanaeze Ndigbo Elders Council in Abuja has said that the re-election of President Buhari may lead to the disintegration of Nigeria.

The Chairman of Ohanaeze Ndigbo Elders Council in Abuja and former Governor of Anambra State, Chief Dr Chukwuemeka Ezeife stated this when some members of Ohanaeze Elders Council, Abuja led by the Director General of Igbo Mandate Congress, IMC, Rev Dr Obinna Akukwe paid him a courtesy call at Igboukwu on Monday to determine how far the reconciliation committee set up by Ohanaeze has gone in uniting Igbos for 2019 elections .

According to Chief Ezeife, ”Ndigbo believes in one Nigeria and we do not want this country to disintegrate but a continuation of the present arrangement with all the numerous crisis across the country could lead to a situation whereby there’s no nation anymore, therefore let us preserve Nigeria first”

On the vexed issue of Igbo Presidencyy which the All Progressive Congress led Federal Government have touted to Ndigbo in 2023 if they vote for Buhari’s second tenure, Chief Ezeife said that there will only be Igbo presidency if there is a Nigeria. Going further he said that “yes we want Igbo Presidency, and our governors have been assembled in Aso Rock to persuade them on the project, but if by 2023 Nigeria has disintegrated, on what will the Igbo presidency float. I doubt whether Nigeria will survive till 2023”
Loading…

Replying to inquiries on how far Ohanaeze have gone in uniting those opposed to Peter Obi;s emergence as Vice Presidential Candidate to Atiku Abubakar, Chief Ezeife told Igbo Mandate Congress chieftains that Ohanaeze in Abuja have spoken to some of the aggrieved parties and the efforts are yielding results. He described the choice of Peter Obi as running mate to Atiku as an expedient choice.

According to him “Peter Obi happens to be the most acceptable Igbo personality for the job. This man governed Anambra State and thinned down the paraphernalia of government, moves with few sirens, carries his luggage aboard aircraft by himself, all in order to save money to develop the state and he left over N70 billion in cash and investments to his successor, and developed the state in the process.”

Going further he said that “all these attempts to blackmail him is an afterthought because the EFCC and other agencies had five years to investigate him, the sudden freezing of his accounts and other spurious stories does not affect the capacity of Peter Obi to be an effective Vice President”

The former governor disagreed with Nnamdi Kanu and IPOB on the plot to boycott elections in the South East. He said that boycotting the election is handing over power to Buhari through the back door.

The former Governor thanked all who attended his 89th birthday celebration in Abuja last month. He said that the event was “well attended beyond my expectations at the International Conference Centre but my regret was that some of the guests , including top government officials could not find a place to sit because the attendance was very overwhelming , drawing people across the entire Nigeria”

Dr Ezeife commended efforts of the Nigerian League of Pastors for Good Governance,NLPGG, Enugu State Chapter in the prayer efforts for good govrnance and promised to mobilize fellow elders to join the prayers when necessary. He said that he is a member of Christian Elders Forum and understands the value of God and prayers in determining the fate of nations.

BREAKING: I’m not afraid of jail’, but Buhari and APC should at least tell Nigerians the crimes I committed – Atiku reacts.