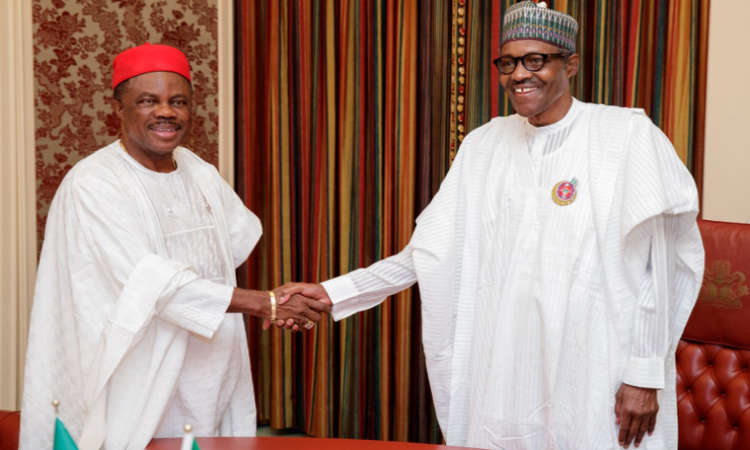 A faction of the All Progressive Grand Alliance on Friday emerged in Abuja with a call on the Anambra State Governor, Willie Obiano, to resign for single-handedly endorsing President Muhhamadu Buhari for the 2019 elections.

The governor had in a video, which went viral, reportedly endorsed the President during the public presentation of a book to commemorate the 80th birthday of a former governor of Akwa Ibom State, Obong Victor Attah, despite having Gen. John Gbor (retd).as its presidential candidate for the 2019 presidential poll.

ALSO READ:  JUST IN: APC Pulled down official website after being cought with plagiarized manifesto

Speaking with journalists in Abuja, chairman of the new group under the aegis of Authentic APGA, Chief Jerry Obasi, said the governor had brought APGA to ridicule, odium and made it a laughing stock in the eyes of reasonable Nigerians.

He accused Obiano of anti-party activities and breach of Article 22(2D) of the party’s constitution.  Obasi said his members must have to decide whether to continue on the “evil trajectory of impunity and political villainy or adopt a strategic template to guarantee the revival of the fundamental ideas that propelled the formation of APGA.”


According to him, the original and foundational ideology of APGA was that it should be inclusive and guarantee the rights of members to express themselves in line with democratic principles.  He, however, said that it was obvious from prevailing circumstances that the party had derailed and lost the moral compass that endeared it to marginalised Nigerians.

Obasi said, “There is urgent need, therefore, for loyal and genuine members of the party to embark on a programme that would bring back the party to the original ideas. This programme would involve the reconciliation and unification of all those that fought through thick and thin to ensure that APGA serves the purpose of political emancipation of all oppressed people.

JUST IN: Nnamdi Kanu and his group are trying hard to make president Buhari a victim of fake news but we won’t let them succeed – Lai Mohammed