How Fulani bandits attacked military base in Katsina, kill…

BREAKING: FG Gets Caution Note From Europe Against Amnesty… 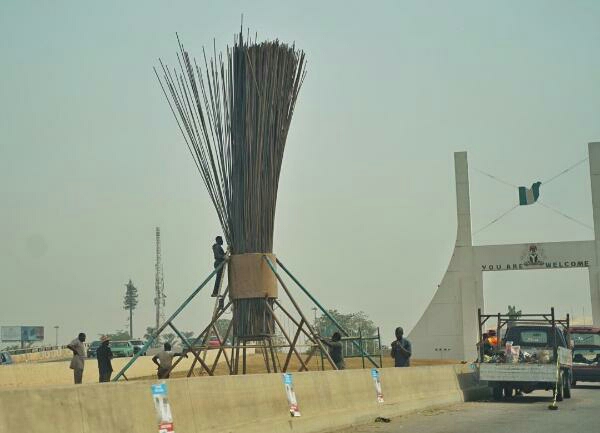 Nigerians online have reacted to the giant broom monument allegedly mounted by All Progressives Congress, APC, at the city gate in Abuja.

The structure, a broom, which is the symbol of the All Progressives Congress after being erected on Friday has since stirred diverse reactions from Nigerians.

Some Nigerians questioned why a party symbol would be erected at such a monumental position as the city gate of the Federal Capital Territory (FCT).

However, the party claimed it was not responsible for the giant broom monument at the city gate .

APC Publicity Secretary, Mallam Lanre Isa-Onilu, in an interview with Channels TV said “the giant broom was erected by Nigerians who support the Buhari-led administration.

“The opposition party also have acces to erect it’s own symbol.”

Meanwhile, Here are some comments from Nigerians on Twitter:

@segun_dearest “APC has invested so much in infrastructure. The Abuja broom says it all.”

@rotexonline “Just drove past the installation of a giant broom, the symbol of the ruling party, near the Abuja city gate, a national monument. This shouldn’t be allowed for whatever reason.”

@Phabsoul “APC, Nigeria does not belong to you, you did not make us, we made you. The broom is not our flag. Please take down that dirty thing and be CIVIL. This is an irritating and annoying site to behold at the city gate, Abuja.”

@Oluwaloniyo “APC says they don’t know who constructed giant broom at Abuja city gate.You mean anyone can construct just anywhere without being stopped? I’m done for the week, let’s just go and sleep.”

@iammayorgeorge “While Ghana is pushing new frontiers of development. Nigeria under the rudderless leadership of General Muhammad Buhari, is so bereft of ideas that it is the mounting a N230m broom at the Abuja gate dat is paramount. You better vote for Atiku,these ones are totally lost.”

@fynefaceiv “APC used 230 million Naira to build giant brooms in abuja, isn’t this corruption? of what economical value is that broom to we Nigerians?

@Thembuhari “Why are you people complaining because of this ordinary broom at City Gate? From tomorrow, helicopters will be flying all over Abuja and dropping brooms on everyone’s roof. We die here!

@Sanokodhi “Umbrella brought nothing 16 years but in just less than 4 years, we have a giant broom in Abuja. What a mighty God we serve!

@AyeeshaMusa1 “So there’s now a mighty broom at the city gate Abuja? These people really don’t know when to draw the line between politics & national development.”

@hailfinger1 “Just 1 week to the general elections, the failed APC led federal government has erected a statute of a broom at the city gate in Abuja. This is shameful and ridiculous. It’s now clear that he whom the gods wants to destroy, they first make mad.”

ALSO READ:  FLASHBACK: ‘Where Are The Cows? Is Evans A Herdsman?’ — When Tinubu Spoke On Murder Of Fasoranti’s Daughter(VIDEO)

@Nerofreshfuture “Imagine the APC erecting a giant broom in front of the Abuja city gate, we never saw any umbrella erected any where for 16yrs of PDP rule o.”

@Smithvinci “Hey CNN, My country Nigeria just mounted a giant Broom in Abuja, please help us tell tourists to come and see.We also have Mugabe’s statue in IMO. Our customers are on your TL.”

@rinmade_davies “Ghana is overtaking Nigeria in GDP, FDI, foreign investment and tourist destination in Africa, but Nigeria under the leadership of APC is busy erecting a #230m gigantic broom at unity fountain Abuja beside the national monument. Who cursed Nigeria?

2019 POLLS: El-Rufai Speaks On Hatred For Christians, Regrets Some Actions