State of emergency will be declared in Anambra if you stop…

2019: It will take God to market APC to a right thinking fellow – Okorocha 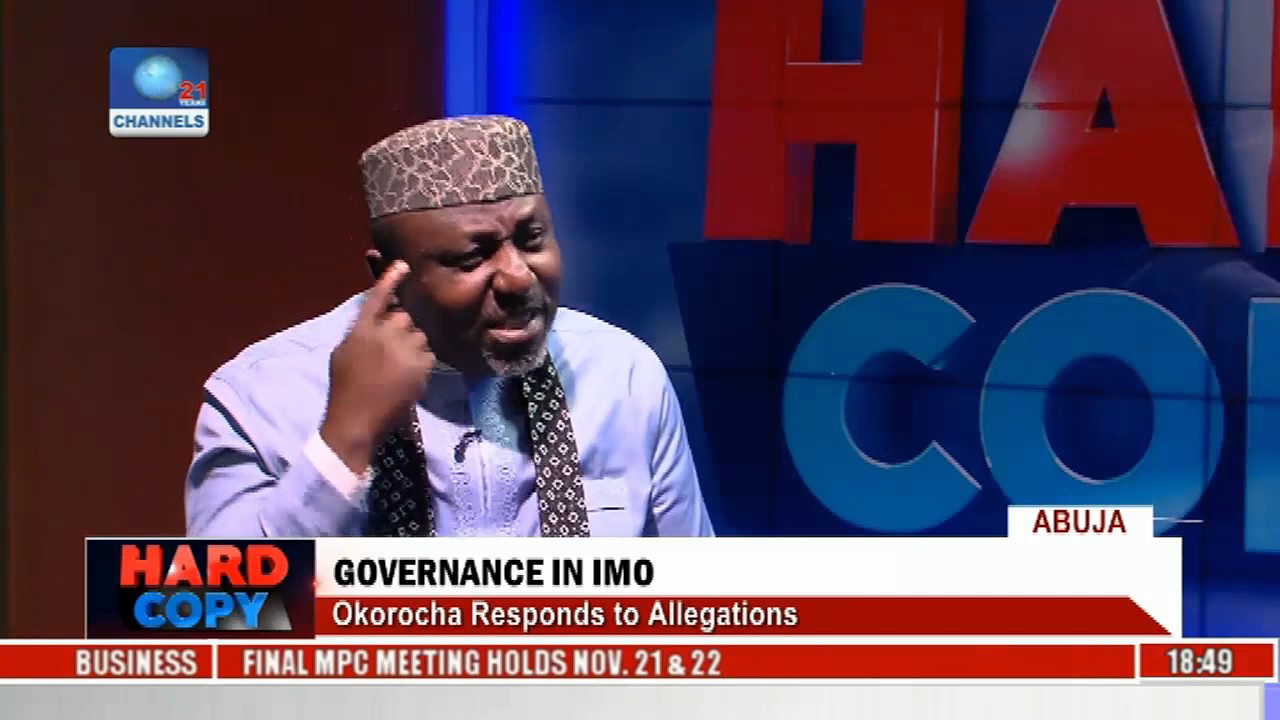 2019: It will take God to market APC, says Okorocha

Imo State governor, Rochas Okorocha, Wednesday night, said it will take God to market the governorship candidate of the All Progressives Congress (APC), Senator Hope Uzodinma to win the 2019 election. The Imo governor said that while it will be easy to deliver President Muhammadu Buhari, it will be impossible to convince any person to vote for the APC candidate, Uzodinma.

Okorocha also stated that he is not the problem of the embattled APC governorship candidate.

A statement signed by the Chief Press Secretary to the governor, Mr Sam Onwuemeodo, said, “it would require God talking from heaven and telling Imo people, “Chief Hope Uzodinma is my beloved son in whom I am well pleased” before Imo people could consider changing their minds. If not, Imo people know those who cannot be their governor. Chief Uzodinma knows this fact and he should stop using the governor to deceive his sponsors”.

The statement continued that, “Adams Oshiomhole’s preferred governorship Candidate for All Progressives Congress, APC, Imo State, Chief Hope Uzodinma, has launched repeated media campaign of calumny against Governor Rochas Okorocha and giving the impression that his problem as the gubernatorial Candidate of Imo APC is the governor”.

“And we wish to quickly crave the indulgence of all men and women of truth to State as follows; Governor Rochas Okorocha is not the problem of Chief Hope Uzodinma as the APC governorship candidate in the State”.

“Chief Uzodinma problem is self-inflicted. Imo people who are going to vote on Election Day know him and he has the choking problem of how to convince them to vote for him to become their governor. The latest story on the APC candidate is that he has been banned from travelling out over allegation of treasury looting. It was not Okorocha who slammed the travel ban on him”.

He added that “he is in Court over 12.5million dollars Contract. That does not concern Rochas. He is in Court for asset declaration issue. That has also nothing to do with Rochas.

“Chief Uzodinma is also in court over issuance of Dud Cheque. This matter also has nothing to do with Rochas Okorocha, among other similar cases. It is also not an oversight that the APC candidate has not made his profile available for people to see.

“Before now, Chief Uzodinma never attended any APC meeting in the State. He has never visited the governor either before or after he was handed over the ticket of the Party.

“Chief Uzodinma went to the Senate in 2011 through the Court. In 2015, he knew how his victory also came. But this time, it is going to be a different ball game with strong governorship Candidates in AA, APGA, PDP, AP, LP, SDP, etc. Ahmed Gulak style or the 2015 stampede won’t be the case in 2019”.

ALSO READ:  We Need Not Worry About Labor Party and PDP, We are Not Equals — Tinubu

According to the statement, “Imo people knew why they settled for Sam Mbakwe in 1979. And Evan Enwerem in 1991, Achike Udenwa in 1999, Ikedi Ohakim in 2007 and Rochas Okorocha in 2011. There are certain ugly stories they do not like to hear about anybody aspiring to govern them.
“Chief Uzodinma should be courageous enough to tell those sponsoring him where the problem lies. It is not Rochas. It is going to be easy to market Muhammadu Buhari and some other Candidates of the party”.