BREAKING:IGP Threatens To Arrest Filmmakers, Others Over…

BREAKING: I Will Knock Anthony Joshua Out Within Two…

2019: My opponents will have the opportunities l never had at the polls – PMB. 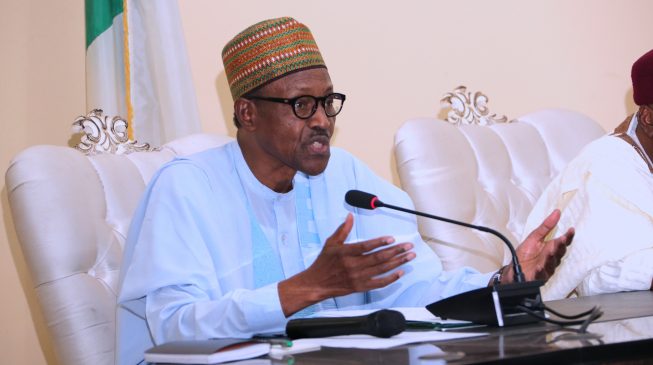 President Muhammadu Buhari has once again promised a level playing field for those contesting the 2019 presidential election.

According to Femi Adesina, Special Adviser to the President on Media and Publicity, Buhari said this at the State House in Abuja on Monday while receiving a delegation from the International Republican and National Democratic Institute, United States.

“I am glad you are here to assess our pre-election preparations. It reminds me of the visit by the then Secretary of State, John Kerry, before the 2015 polls. We appreciate the concern of America for stability in developing countries,” the President was quoted as saying.

“Having run for President three times, ending up at the Supreme Court all three times, before God and technology made a way for me the fourth time, I know what it is to be cheated at the polls. What they used to do was just to award votes, and tell anyone who was dissatisfied to go to court. But we won’t do that. I am prepared to give the opposition the opportunities I was not given in the past.”

Buhari assured the visitors that he had told the heads of the security agencies not to be partisan, but to do their work professionally, and allow the will of the people to prevail.

Stressing that the governing All Progressives Congress (APC) would keep faith with its priorities of securing the country, reviving the economy, and fighting corruption, the President expressed happiness that the opposition had not been able to successfully fault the focal areas of the government.

ALSO READ:  The UN and ECOWAS warn that the Nigerian 2023 election could lead to conflict if it is not handled well. This could disrupt the peace in West Africa

“We have done fairly well in the areas we focused on. We know how many local government areas in the north-east were under Boko Haram occupation before we came.

“That does not happen again, save for cowardly attacks, using young girls as suicide bombers. Other areas of security challenge like farmers-herdsmen clashes are receiving attention, and would be sorted out as much as possible.”

On the Electoral Bill that was not assented to, the President said: “Time is against us. We are extremely vulnerable, and need to be careful that messages are not hijacked and figures tampered with, while being transmitted electronically. Even the Russians were accused of tampering with American election, so we will remain conventional, and use electronic transmission in subsequent elections.”

Leader of the American delegation, Ambassador Linda-Thomas Greenfield, said they had met with the media, civil society, and political parties, and concerns expressed include fears of security agencies being partisan in the forthcoming elections, suspected non-commitment to free and fair elections by key stakeholders, delayed budget for the electoral umpire, Independent National Electoral Commission (INEC), and the non-signing of the new Electoral Bill.

JUST IN: Buhari’s failure is as a result of incompetence, it has nothing to do with me – GEJ