“Put EX-SENATOR Signboard At The Entrance”… 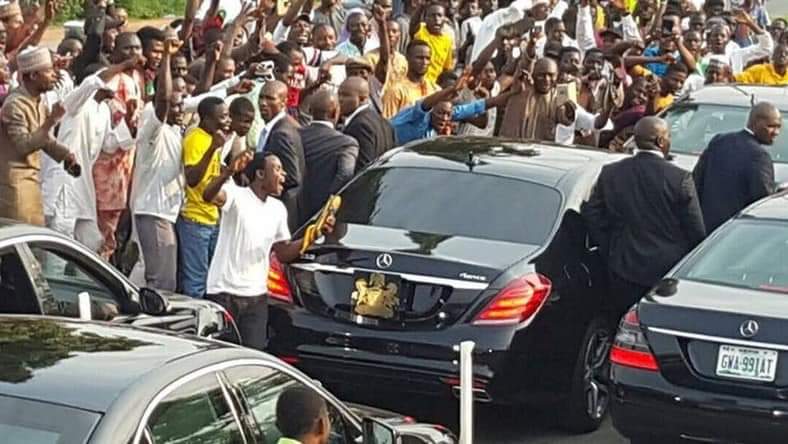 Buhari, who was smuggled out of the Stadium because of the uncontrollable crowd, left the vicinity hurriedly.

The crowd disconnected the public address system and carted away with the cables, over crowded the podium, they also vandalized vehicles and some parts of the stadium.

The President and other dignitaries could not gain access to the podium because of the mammoth crowd.

They could not use the public address system, so none of the dignitaries spoke including the president, who could only wave the crowd, before he was smuggled out through the VIP section of the stadium.

At the gate of the stadium, party faithful kept pushing to enter defying the orderly queue.

DSP Teena Tyopev, spokesperson had before the event said that 2, 050 police personnel have been deployed to ensure a hitch-free even.

As many as the security personnel were, which included military, NSCDC, vigilantes among others, they still had rough time containing the crowd.

It would be recalled that, the Chairman of Commitee and Deputy Governor of the State, Prof. Sonni Tyoden, had during a press briefing on Wednesday envisaged the turnout, and assured that adequate security arrangement was in place.

Tyoden said, “As usual, we are expecting a large gathering of party faithful from all the 17 local government areas of the state. Conscious of the expectation of his coming, all other arrangements including security before and after the grand rally is in top gear”.

Meanwhile, the main opposition PDP had earlier before the arrival of President Buhari, said citizens of the state have every reason to panic over the president’s visit, saying anytime he visits the state “our peace in the state would be threatened by his knife wielding, club carrying supporters”.

The PDP equally said the citizenry have every right to “panic and shiver”, because they have lost confidence in the leadership style of Governor Simon Lalong and President Muhammadu Buhari.

The party through its State Publicity Secretary, John Akans, said the people of the state have to panic because their experiment with the APC led administration has prove to be the worst mistake they ever made in recent times.

Akans said, “As Plateau people prepare for the APC Presidential flag bearer’s visit to the state on Saturday (today), January 19, 2019, Plateau should panic, shiver because they have lost confidence in Governor Lalong and President Buhari’s leadership.”