BREAKING:Chinese Authorities Shut Down Over 10,000 Ethereum…

Bill Against Hate Speech May Bring Nigeria To A Miserable…

BREAKING: Absence Of NSA, Monguno At Meeting Of Service… 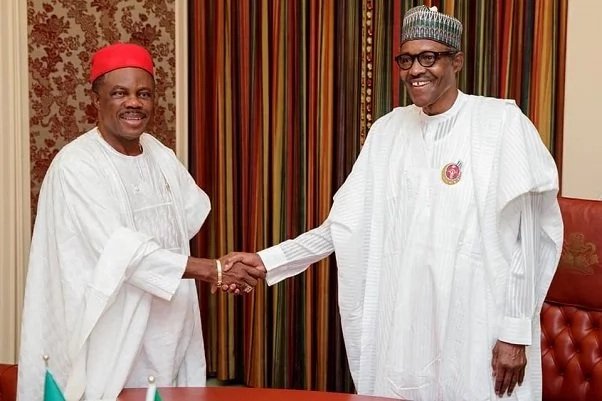 “We have read bits of the communiqué purportedly issued by the Ohaneze leadership. We regret that they do not reflect the position of the people and Government of Anambra State”.

SAHARANEWS – The Anambra State Government has washed its hand off the Thursday’s endorsement of the presidential candidate of the Peoples Democratic Party, PDP, Alhaji Atiku Abubakar.

SaharaNews earlier reported that Atiku was endorsed during Imeobi, a meeting of the highest decision making body of Ohanaeze, the apex socio-cultural organization of Ndigbo.

Some of the reasons for the endorsement included Atiku’s promise on restructuring and his choice of Mr. Peter Obi as his running mate.

Obi is the immediate past Governor of Anambra State.

However, addressing a press conference late Thursday night, the Secretary to the Anambra State Government, Prof Solo Chukwulobelu, who led a delegation of the State to the Imeobi, said they were not part of the exercise.

He described the development as a divisive trajectory capable of destabilizing Ndigbo.

While faulting Atiku’s endorsement, he said “in compliance with the directive by the Anambra State Governor, Chief Willie Obiano, a delegation of the Anambra State Government arrived at Nike Lake Hotel in Enugu early enough to participate in the meeting of Ime Obi of Ohaneze Ndigbo scheduled to start at 7pm, as agreed on by the Chairman of the South East Governors Forum, Engr Dave Umahi, and the President General of Ohaneze, Chief John Nnia Nwodo.

“The delegation led by the Secretary to the Anambra State Government, Professor Solo Chukwulobelu, was surprised to learn that the meeting had been held earlier and lasted for a mere 30 minutes. The representative of the Ebonyi State Government, Dr Eric Kelechi Igwe, who arrived at the venue before the time the meeting was scheduled to start was also surprised that it had already taken place. The same goes for others like the Minister of Science and Technology, Dr Ogbonnaya Onu, and the Minister of Labour and Employment, Dr Chris Ngige, OON.”

ALSO READ:  BURSTED: (VIDEO) Facts The Federal Government Would Go To Any Length To Keep Away From Nigerians

He added that “we are, indeed, surprised that the Ime Obi meeting could hold today of all days. We had expected Ohaneze leaders to participate actively in the commissioning ceremony of the Zik Mausoleum, Onitsha, Anambra State. The Mausoleum, which was started by the General Sani Abacha government, took a whole 23 years to complete.

“We have read bits of the communiqué purportedly issued by the Ohaneze leadership. We regret that they do not reflect the position of the people and Government of Anambra State.

“The position of the Anambra State Government is that Ohaneze should remain a united organization umbrella for all Ndigbo, and should not take sides with any party. There are major leaders in all political parties, including the three major ones in Nigeria, namely, APGA, APC and PDP.

“It is deeply regrettable that the Ohaneze leadership has chosen to go down a divisive trajectory capable of setting back Igbo unity for several years.”