Biafra: Henceforth we will not allow Nigeria’s…

Labour Party-NNPP Merger: We’re Yet To Agree On If… 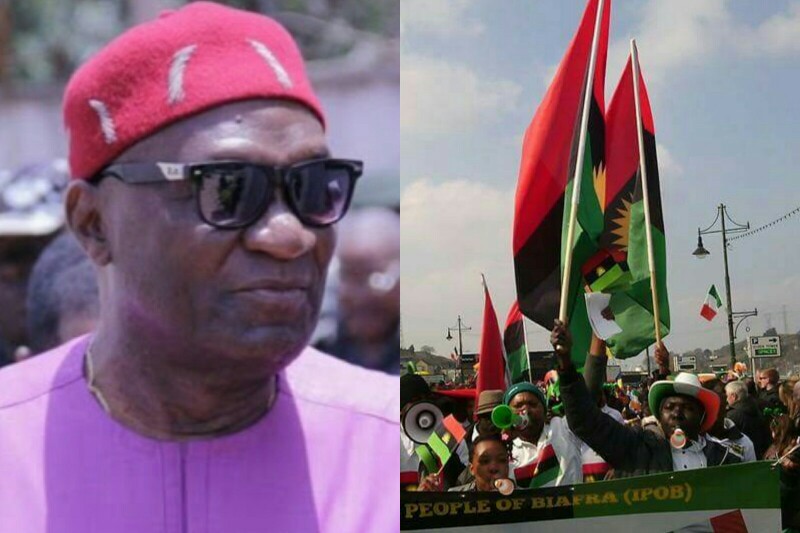 SAHARANEWS – Ahead of tomorrow’s general election, pan-Igbo groups and stakeholders have raised concerns about the safety of Ndigbo in different parts of the country.
They made their position known after a well-attended emergency meeting convened in Enugu, yesterday, by the Ohanaeze Ndigbo in collaboration with Alaigbo Development Foundation (ADF) with the Indigenous People of Biafra (IPOB); Movement for the Actualisation of Sovereign State of Biafra (MASSOB) and several other bodies present.

They condemned the heavy militarisation of Igbo communities in the name of election and warned the security forces to ensure that no Igbo son or daughter was maltreated in their bid to exhibit crude might.
At the meeting were President General of Ohanaeze Ndigbo,Chief Nnia Nwodo; President of Alaigbo Development Foundation (ADF), Prof. Uzodinma Nwala; Chief Emmanuel Iwuanyanwu; Prof. A. B. C. Nwosu; Chief Ben Obi and Gary Enwo Igariwey.

MASSOB leader, Uchenna Madu also attended the parley.
The meeting was addressed by Nwodo, Nwala, Iwuanyanwu and Madu. They called on the international community to monitor closely the activities of the military in the South East, during and after the elections.

The stakeholders agreed to work together, in the face of the existential threat confronting Igbo, as a people, including recent events in the Nigerian polity especially in the aftermath of the postponement of the presidential and National Assembly elections.

Stakeholders issued a communiqué, after the meeting.
They said: “We urge all town unions in Igboland to be vigilant, to monitor and control the movement and activities of all persons in their domain and report all untoward activities to the appropriate quarters for analysis and action.

“We urge Ndigbo in their places of abode in Nigeria, and elsewhere, to continue to live peaceably and go about their civic duties in an orderly and exemplary manner, for which we are well known, but refuse to be intimidated by anybody.
“We note with great apprehension, the massive mobilisation and deployment of soldiers within all enclaves in Igboland; we also note that there is no constitutional provision for the deployment of soldiers for electioneering purposes and therefore, advise that every effort must be made to ensure that these soldiers do not engage in the harassment of the public going about their lawful civic responsibilities.
“We call on the Federal Government to ensure the safety of Ndigbo, especially those living in northern Nigeria and other parts of the country; and call to order, any public officer that may, through words or actions, be promoting violence.”
They also insisted on its preference for the presidential candidate of the People’s Democratic Party (PDP), Atiku Abubakar.

“Ndigbo, reiterate our unequivocal support and endorsement for the Atiku/Obi presidential ticket as already announced by the national leadership of Ohanaeze Ndigbo Worldwide, ADF and other Igbo interest groups.
“We call on all Igbo registered voters both at home and outside the Igboland to come out en masse, join all patriotic Nigerians of other ethnic nationalities and vote for the Atiku/Obi ticket. This election is our collective struggle for freedom and we must count it all joy to be part of history.