Nigeria Constitution Is Carefully Designed To Frustrate And… 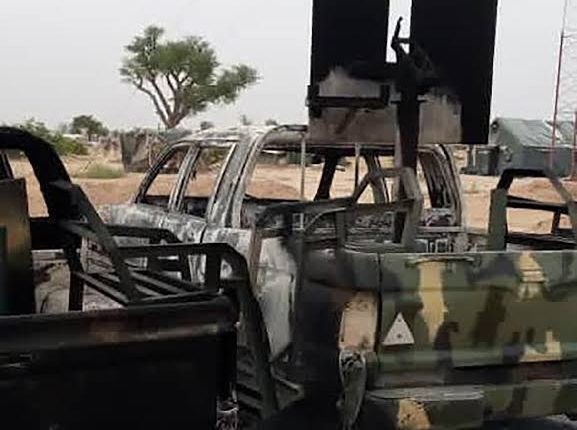 Our reporter learnt that, the base was located at Dama village of Sabon Birni local government.

The attack was said to have taken place in the early hours of last Friday.

“The bandits whom came in large number, surrounded the camp and started firing from different directions ,” our source said

The marauders also burnt down two patrol vehicles and carted away another one which was used to convey food items stole from the villagers.

Danchadi said that, they received a report about the attack from a resident of the area who was using Nigerien network.

It could be recalled that mobile network around the area was shutdown to give room for further operations by the security agencies  drafted  the area.

“But I will still contact him for more updates and get back to you,” he assured

However, a prominent traditional ruler in the area confirmed that, some vehicles were sent to evacuate corpses of the fallen heroes.

“And over 10 trucks loaded with well armed soldiers are currently in the forest trailing the bandits.

A personnel of the Nigeria Security and Civil Defence Corps who sought for anonymity confirmed to our reporter that three of their Corp members were among the casualties.

“As I am talking to you, we are at the morgue to claim and recover their corpses for burial,” he said

It was learnt that, the bandits also attacked Katsira village and shot four persons.

Two of the victims were said to have died instantly while the remaining two were receiving treatment at the undisclosed hospital.

The bandits were also said to have whisked away with three persons from the village.

The spokesman of the 8 Division of the Nigerian Army, Major Yahaya Ngulde could not comment on the issue but directed our correspondent to reach out to the Director Defence Media Operations Birgadier General Onyeoku bear his phone number.

The General however could not picked calls neither respond to text sent by our correspondent.

Similarly, the Police Public Relation Officer, ASP Sanusi Abubakar said he was not aware of the attack.

However, the Commissioner for Carriers and Security Matters, Colonel Garba Moyi (rtd) has confirmed the attack on the military base but that he was not sure of the number of death.