How Nnamdi Kanu was kidnapped and illegally repatriated to…

Shiites held processions to mark 40 days after the premeditated genocide on them – vowed to avenge their dead. 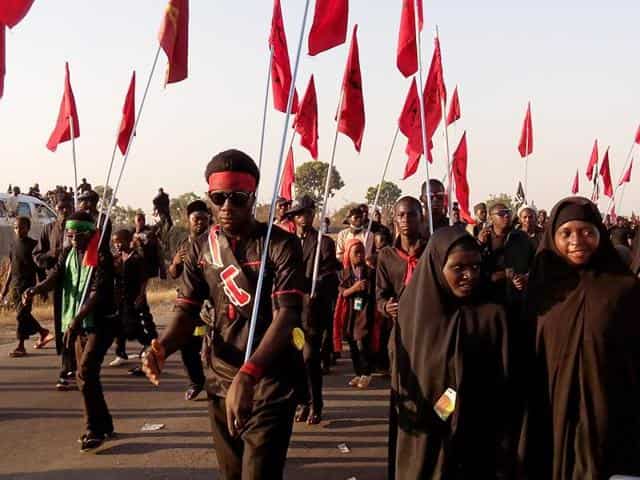 Members of Islamic Movement in Nigeria (IMN), otherwise known as Shiites, have held a march to mark 40 days since the ‘Arbaeen Symbolic Trek’ held in October 2018.

The group also accused the president of ordering security operatives to “kill 52 of its members” during the trek which held in Abuja. Followers of Sheikh Ibraheem El-Zakzaky had embarked on the ‘Arbaeen Symbolic Trek’. The three-day protest took place from October 28 till October 30, 2018.

The march, however, took a different turn as the Nigerian Army attempted to dispel the protest, which led to a clash and the soldiers opened fire on the Shiites.

The group, however, held a protest march on Friday, which began from the Central Mosque immediately after the Juma’at Prayer, and ended at Zone 4.  Addressing the crowd, spokesperson of the movement, Ibrahim Musa, accused President Muhammadu Buhari of being behind the killings and arrest of members of IMN.

His words: “Till today, the Nigerian government intentionally refused to brief the public on the actual reason behind such a barbaric massacre on its citizens. The military were confused enough to say that they were pelted with stones, which was justified with the use of live bullets. “When somebody dies in Islam, after 40 days there will be a prayer and remembrance for the person. So, today is 40 days after the President of Nigeria ordered the army’s ‘Guards Brigade’ to kill followers of Sheikh Ibraheem El-Zakzaky during their Arbaeen Symbolic Trek here in Abuja.

It is the Guards Brigade that came out and opened fire on unarmed citizens with live ammunition, including tankers and all sorts of arms and weapons they used against us. They killed 52 people and went with so many.”  He said the movement lost another member who had been receiving treatment in the hospital, as a result of the torture she experienced, adding that 70 per cent of the young people who lost their lives during the protest were graduates and students of various higher institutions of learning.

“They were mercilessly killed by the Guards Brigade ordered by the president. Remember, the Guards Brigade is answerable only to the President of Nigeria. They are yet to come out and tell us why they killed 52 followers of El-Zakzaky,” Abdullahi added. The group said it would continue to carry out its daily protest to demand justice and unconditional release of their leader.

BRAKING: The electoral bill will have to wait until after the 2019 general election – PMB

BRAKING: Nigeria voted against Israel in favor of terrorism at the UN General assembly