BREAKING: On Security in Eastern Nigeria, it has nothing to… 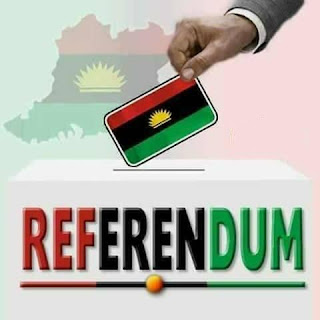 On this date in 2022, November 25, I CHINASA NWORU appeal to the United States government to stop applying a double standard regarding the extraordinary rendition of Mazi Nnamdi Kanu, who was released and acquitted by the Nigerian court of appeal.USA Ought to realize that these specific issues referenced above require just a single norm.
After 10 years and 50 years of the Biafra genocide,I now realize that the United States of America would have no standards if they did not have double standards, despite IPOB’s worldwide appeal for Biafra independence.They have behaved as if they are unaware that Mazi Nnamdi Kanu was extraordinarily detained and tortured by the Nigerian government for nearly a year and six months after being extraordinarily deported from Kenya.In addition, despite #MNK’s discharge and acquittal by the Nigerian court of appeal, he remains imprisoned in the DSS dungeon, and the renowned international police act as though they are unaware of what is taking place in Nigeria and the growing tension in the country ahead of the 2023 elections.
When it comes to the Biafra referendum and Mazi Nnamdi Kanu’s unconditional release, the US will not benefit from applying double standards.The West has manipulated our lives for decades, and we will not give them another chance, so it would be greatly beneficial if the United States acted swiftly to avoid placing blame on Biafra.
Biafrans have been shown by the US government that they only cry when a bird cries, not when a fish bleeds, which we consider to be a double standard.It is fortunate for the US government to have a voice that can urge the Nigerian government to comply with court orders to release Mazi Nnamdi Kanu; however, the Nigerian government is attempting to flee from their responsibilities, which will increase the danger even further.
However, it is preferable for the current US government to resolve the Biafra exit and Mazi Nnamdi Kanu’s release as soon as possible and without hesitation. This will help reduce the threat to Nigeria, the Gulf of Guinea, and the West African region.I’m telling the US government to never use two different standards when it comes to crucial issues like Mazi Nnamdi Kanu’s release and the exit of Biafra because the disaster that will happen to them is better left to the imagination.
Say no to US double standards regarding MNK’s unconditional release and exit from Biafra.