ABA CHECKPOINT KILLING: IPOB Rejects The ‘Fake’ Name Published By Nigerian Army, Insists That The Real Killer Of Chimaobi Must Be Produced Or…. 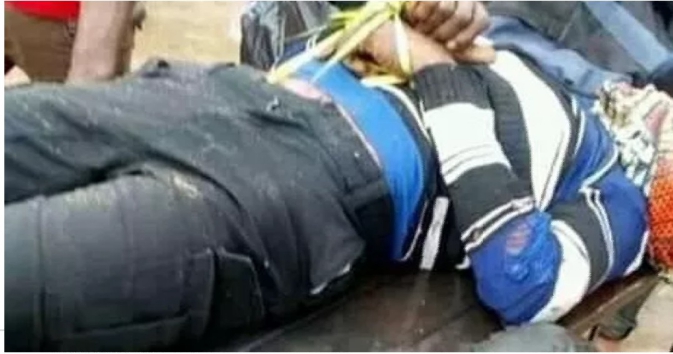 SAHARANEWS – The Indigenous people of Biafra, IPOB, has called on the Nigerian military of the 82 Division of Enugu State to release the picture and video evidence of the Nigerian soldier who shot and killed a commercial motorcyclist in Abia State.

Nigerian soldiers had murdered a commercial motorcyclist, Chimaobi Nworgu on 7th August 2019, for his refusal to give them N100 bribe.

In a statement on Sunday, IPOB said that they are 100% certain that it was a Fulani soldier that shot and killed Chimaobi, and not a Yoruba named ‘Lance Corporal Ajayi Solomon’, as alleged by the Nigerian army.

IPOB said if the murderer is not fished out and justice done, it “will allow the simmering anger and rage within every soul” in South-East to explode.

Since it has become routine for Nigerian army to always deny culpability in the countless deaths and killing of innocent civilians in Nigeria especially the most recent cold blooded murder of Chimaobi at Ntigha-Uzor Community in Obingwa LGA, Abia State, we the global family of the Indigenous People of Biafra (IPOB) insist that it is our duty to continue to hold the Nigerian military and by extension Aso Rock responsible for their role in these crimes.

Fulani Jihadists in Nigeria Army uniform at 82 Division Enugu must release the pictorial and video evidence of the murderer that executed Chimaobi Nworgu on Wednesday 7th of August, 2019 or we will allow the simmering anger and rage within every soul in our land to explode.

We are 100% certain that it was a Fulani soldier that shot and killed Chimaobi in his compound and not a Yoruba named fictitious ‘Lance Corporal Ajayi Solomon’. The only group within the army with a history of ruthless cold blooded execution of innocent people at checking points across the East are unlettered core Nothern recruits. This is an indisputable fact.

Without the benefit of public parading of the so-called Lance Corporal Ajayi Solomon as is customary with law enforcement agencies in Nigeria, the continued denial of the army will be seen as mockery of the deceased and entire Biafra nation. What these well marshalled lies and cover-up from the army and Okezie Ikpeazu means is that both Ikpeazu and 82 Division of the Nigerian Army stationed at Enugu think we Biafrans are stupid or undiscerning.

It is important we notify all and sundry that Nigerian Army remain unwilling to solve this problem in a civilised amicable manner. We wish to remind them and Okezie Ikpeazu their errand boy in Abia Government House that Mr Chimaobi Nworgu is a father of three children who was murdered in his compound on Wednesday 7th August, 2019 for no other reason than the fact he is a Biafran going about his legitimate business. Both Okezie Ikpeazu and the Nigerian Army must come up with real name and verifiable photo identification of the true killer.

Our preliminary search of army records indicate that nobody by the name Lance Corporal Ajayi Solomon was deployed to any checking point in Aba. The only act that will assuage the seething anger of the people is for Nigerian Army to parade the murderer of Mr Chimaobi Nworgu. If Okezie Ikpeazu is counting on the fact this wicked slaughter of an innocent family man will be swept under the carpet like other army atrocities in Abia State which he sanctioned, then he is deluded. The public will not be deceived anymore.

Our contention is very simple, the murder of Chimaobi was not carried out by any Corporal Ajayi Johnson. Specifically we are not aware of Yoruba officers killing innocent civilians at checkpoints and definitely not for N100. The only people with a history of brutality and mindless savagery are Fulani recruits on the army and police, bandits, herdsmen and terrorists. They are the people who have over the years indulged in the killing of motorists over money and land grabbing. History is there to prove our assertion. The whole world can bear us witness on this fact.

CHECKPOINT RAPE: Army Dismisses Soldier Rapist, Hand Him Over To Police For Prosecution