No Fulani Man Has Been Prosecuted, Punished For Murdering… 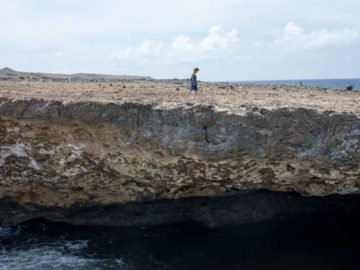 In July, T Magazine sent Akwaeke Emezi, author of haunting novel, Freshwater, to the Dutch Island of Curaçao for their travel issue.

Four months later, the writer is back with an equally haunting short story about a child ghost who is anchored to the island.

Emezi took to Twitter to make the announcement: “Back in july, @tmagazine sent me to curaçao to write a fairytale for their travel issue. i’m delighted to have been a part of this, please read @yanagiharahanya’s editor letter below, it’s stellar. I didn’t want to write an European Fairytale because a) colonialism b) curaçao is literally still within the kingdom of the Netherlands, so I wrote a ghost story based on as much of afro-curaçao as i could access. I hope you enjoy it.”

Freshwater, which is Akwaeke’s debut novel, explores Igbo spirituality as a foreign and familiar concept and a narrative that delves into identity, mental illness and the multiple realities we inhabit. It is a journey into and through self and Igbo cultures.

The same spellbinding techniques can be seen in this short story, which follows a young child ghost who yearns to be free but can’t seem to let go of the past. The author successfully incorporates Afro-carribbean and the Island’s cultures and mannerisms into the story — smooth mentions of Loki Loki treatments for headaches, pulsating Tambu beats, and the animating power of an inanimate coral.

Without further ado, here is an excerpt of A Child Ghost, an Escape and a Watery Haunting on Curaçao:

“By now, your hair is locked tight and salt has pickled your eyes, your tongue, your throat. Like you’re made of crystals. You’re not sure where your body went after you died — maybe the fishes ate you away slowly, maybe a riptide collected your bones and flung them out into the deeper dark waters.

All you’ve known is this thorned island, and now the drag of rocks that you’re locked to, in this small, clear cove, a few feet under the surface. You can’t remember how long you’ve been dead, or why you continued to live afterward, bound to these stained stones and the sound of the sea sluicing between them. They built a boardwalk over you a while ago, a stretch of lined wood, and the other children love it. They run along it, they race, they leap into the blue jewel that is the water, clear of the rocks and the shadow you share with a thousand small crabs tiptoeing around your bubbled mouth.

They smell so free it hurts — the kind of free that’s never known iron against their ankles or seen it weigh down their mothers’ wrists. You are jealous.

Now there are cruise ships that come in instead of the other ones. These are the biggest boats you’ve ever seen; they clog the water and the sky. There is a dead girl who likes to follow them from island to island. She’s young, like you, and sometimes she comes to visit your little cove. She taught you what to call the big boats, but she never tells you how she’s able to move so freely, no matter how many times you ask. If you try to follow her when she leaves, you only make it a few feet through the water before everything stops. It’s not even darkness that wraps around you, it’s just… nothing. When it starts again, you’re always back under the boardwalk with the crabs and the tiny darting silver fish.

This time, however, you’ve decided it’s going to be different.”

I am changing my lyrics because of my kids – Wizkid