BREAKING:Williams breaks down in tears after Australian Open… 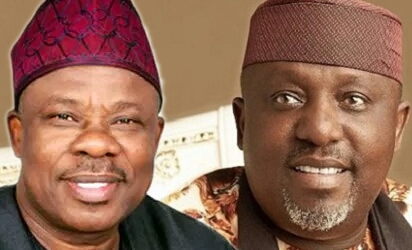 Moved by their actions in flaunting rival governorship candidates, All Progressives Congress, APC, has initiated moves to suspend Governors Rochas Okorocha of Imo State and Ibikunle Amosun of Ogun State from the party.

Governor Okorocha’s spokesman, Mr. Sam Onwuemeodo, dismissed the claim yesterday, describing it as a rumour that had been in circulation for the past five months.

The two governors have been at loggerheads with the Adams Oshiomhole-led NWC, following their differences over the governors’ insistence on the emergence of their preferred choices as APC governorship candidates in Imo and Ogun states.

Okorocha had backed his son-in-law, Mr. Uche Nwosu, as his successor, while Amosun backed a member of the House of Representatives, Adekunle Akinlade, as his successor. However, their failure to realise the goal of making them APC flag bearers forced them to other party platforms.

The brickbat between Okorocha and Oshiomhole was despite the fact that Okorocha was one of the strongest backers of Oshiomhole’s emergence as national chairman.

Akinlade has since emerged as candidate of Allied Peoples Movement, APM, in Ogun State.

The move to suspend Okorocha, Vanguard gathered, yesterday, is being spearheaded by Imo State chapter of the party and a reasonable proportion of the party’s National Working Committee, NWC, is now disposed towards it.

The ratification of the move would, however, be given by the National Executive Committee, NEC.

The last straw for the APC was the governor’s open support for the Action Alliance candidate, Nwosu, during Mrs. Buhari’s visit to Owerri, the Imo State capital, last weekend.

A high-level party source said: “Rochas campaigned against the APC candidate during the women rally last Saturday. He is supporting AA and we know that the AA national chairman is also backing the Peoples Democratic Party, PDP, presidential candidate, Atiku. So, APC sees this as a deceit.

“The same thing will happen in Ogun State as the APC leadership will not tolerate such acts at all.

“The APC sees their action as an insult to Mr. President who is the leader of the party. The AA national chairman cannot be supporting Atiku, while they are supporting AA. They cannot fool the party.’’