Don’t raid or use roadblocks to extort money from…

“As President Of Nigeria At That Time, I Came Under Almost Unbearable Pressure From The Cameron Administration To Legalize LGBTQ Same Sex Marriage In Nigeria” – Jonathan 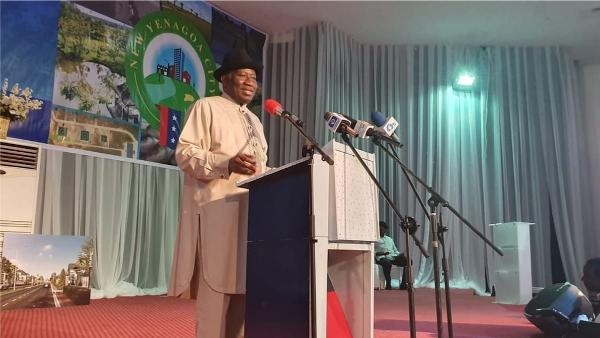 – Going further, Jonathan added that Cameron has long nursed deep grudges against him

Former president Goodluck Jonathan has reacted to the allegations raised against him in the memoir of former British prime minister, David Cameron.

Cameron had in his memoir claimed that Jonathan refused help when Boko Haram kidnapped 274 schoolgirls who were kidnapped on April 14, 2014 in Chibok, Borno state.

According to him, British troops traced the location of some of the victims and offered to help but Jonathan refused.

In a statement released by the former Nigerian president, nothing of such ever occurred.

Jonathan claimed that he even wrote Cameron, US president, Barrack Obama, and the then French President, François Hollande, as well as the Israeli Prime Minister, Benjamin Netanyahu, appealing to them for help in rescuing the Chibok Girls.

“How could I write to appeal for help and then reject the very thing I appealed for?”

Going further, Jonathan wrote: “Also, history contradicts Mr. Cameron. On March 8, 2012, when the same Boko Haram linked terrorists abducted a British expatriate named Chris McManus, along with an Italian hostage Franco Lamolinara, in Sokoto, I, as Nigerian president, personally authorised a rescue effort by members of the British military Special Boat Service supported by officers and men of the Nigerian Army, to free the abducted men.

“So, having set a precedent like that, why would I reject British help in rescuing the Chibok Girls, if it was offered?

“I also authorised the secret deployment of troops from the United Kingdom, the United States and Israel as a result of the Chibok incident, so how Mr. Cameron could say this with a straight face beats me.

“Moreover, on March 8, 2017, the British government of former prime minister, Theresa May, in a widely circulated press statement, debunked this allegation and said there was no truth in it after Cameron had made similar statements to the Observer of the UK.

“In his book, Mr. Cameron failed to mention that I wrote him requesting his help on Chibok. Why did he suppress that information? I remind him that copies of that letter exist at the State Houses in Nigeria and London. He never called me on the phone to offer any help. On the contrary, I am the one that reached out to him.

Going further, Jonathan added that he knew that Cameron has long nursed deep grudges against me for reasons that have been published in various media.

At that occasion, he boasted that he would send the team that successfully drafted and promoted the Bill, to nations, like Nigeria, saying inter alia: “I’ve told the Bill team I’m now going to reassign them because, of course, all over the world people would have been watching this piece of legislation”.

“As president of Nigeria at that time, I came under almost unbearable pressure from the Cameron administration to pass legislation supporting LGBTQ Same Sex marriage in Nigeria. My conscience could not stomach that, because as president of Nigeria, I swore on the Bible to advance Nigeria’s interests, and not the interest of the United Kingdom or any foreign power,” he added.