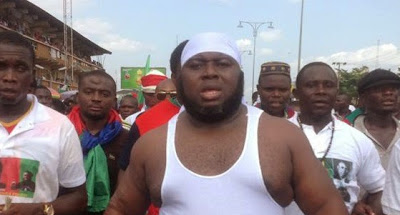 The Nigerian government has described the reported formation of the Biafra Customary Government by Asari Dokubo as a joke that is meant to entertain.

Dokubo, who is the leader of the Niger Delta Peoples Salvation Force, had declared the formation of the purported government on Sunday and also named those who would serve as leaders in the government alongside himself.

He added that they would proceed to set up provincial structures for the new government.

Speaking on the development in Lagos on Monday, the Minister of Information and Culture, Lai Mohammed, said the administration of President Muhammadu Buhari would not be distracted by what he described as, “theatre of the absurd by a joker seeking attention’’.

Mohammed said Dokubo is free to run a phantom government, stressing that the Buhari-led administration will not be distracted.

He said, “I am sure you have heard of the theatre of the absurd; that is the best way I can describe it.

“If Asari Dokubo wants to form and run a phantom government, I think he is free to do so. This administration will not be distracted because we still have a lot to do.

“We are not ready to give any attention or time to a joker like Dokubo who is just looking for attention. We will just take it as one of these entertainment things.

“The beauty about Nigeria is that it is never a dull country; you must have one thing or the other to entertain you.”

Dokubo on Sunday declared himself the leader of the new Biafra defacto Customary Government (BCG).

In a statement signed by Uche Mefor, BCG’s Head of Information and Communications, the former militant leader named those who would serve as leaders in the government alongside himself.

ALSO READ:  JUST IN: We’ve been vindicated by Buhari’s refusal to participate in debate —IPOB

He said, “We as people have resolved that as Biafra, it’s time for us to take our destiny in our hands and bring freedom to ourselves and our children and the generation of Biafrans yet unborn. I hesitate a little but I thank God that it’s time for us to do our duty and our service to motherland, I have accepted this role. I have dedicated my life hundred percent to play this role.

“My first act today in taking this position is to name those who would be on the driver’s seat to navigate through this period of tempest, this period of uncertainty with me. I want to call on our brother, George Onyibe to come on board to join as the secretary of the defacto customary government of the State of Biafra. He will take care of the administrative, day-to-day administration of the Biafra State.

“I also call on our brother Emeka Emeka Esiri to take care of the legal needs of this nascent government. My brothers and sisters, the four of us will kick start the process, others will come on board. We want volunteers who are committed. We want volunteers because there is nothing anymore. We are the people who have volunteered to salvage ourselves and the rest of us.

Dokubo also mentioned education and agriculture as key areas of focus. He condemned the recent stoppage of food transportation to the South.