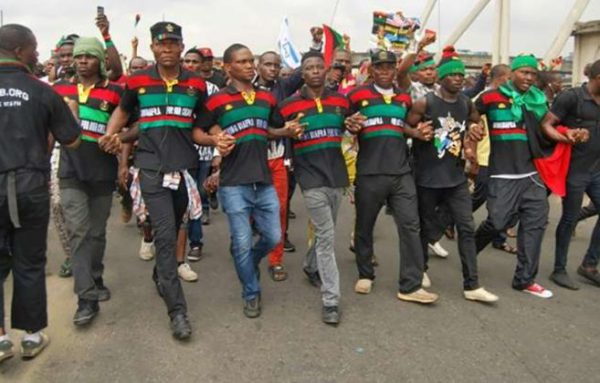 The Indigenous Peoples of Biafra has said that banditry is a new means the political leaders from the North are using to steal public funds and amass wealth for themselves.

In a statement released to SaharaReporters on Friday through its media and publicity secretary, Emma Powerful, the group said that criminal politicians in the Northern part of the country connive with bandits to siphon public funds by paying them ransoms to release their abducted victims.

The group also questioned the reason clerics negotiating with bandits are not arrested, adding that a governor supporting herders to bear arms have not been interrogated.

“We the Indigenous Peoples of Biafra, IPOB has observed with utter bewilderment that banditry has become a gold mine for some Northern leaders. It’s now another oil well for greedy, unpatriotic and evil-minded beings masquerading as leaders. They are feeding fat with blood money. Bandits are now working together with some Government officials to steal public funds in the name of ransom.

“Banditry and kidnapping will remain a lucrative business in Nigeria for as long as government and self-acclaimed religious clerics keep negotiating with them. Anyone advocating amnesty for murderous vampires like Fulani bandits is their grandmaster?

“If Nigeria were to be a normal country where there is sanity and decency all those people championing for amnesty for the killer bandits would have been arrested and put on trial.”

He continued, “The so-called shoot on sight order by the President Muhammadu Buhari double is only a paper tiger. It wasn’t meant for everybody. We know who they have in mind. It’s only the daft that will think that such order is meant for Fulani bandits and killer herdsmen carrying out the Fulani agenda.

“If a serving governor can boldly come out to defend the carrying of guns by Fulani herdsmen, how do you ever think any of them is going to be arrested when their kith and kin are the ones going to enforce the order?”

The statement further asserted that the country cannot experience a progressive turnaround until its citizens hold the government officials responsible for their actions by asking critical questions. It also said that banditry will persist inasmuch as the politicians are supporting bandits via negotiation and payment of ransoms to them.

“This nonsense banditry has continued to surge because Nigerians are not asking the right questions. Any day Nigerians get up and demand to know why they have a President who rather chooses to talk to them through a press statement by media aides or the Presidency instead of talking to them live, there will be a change.

ALSO READ:  Opinion: The Episodes Of Gov Rochas Okorocha That We Will All Miss - Jesse Akubude

“Any day Nigerians begin to ask why the authorities have not been courageous enough to declare killer herdsmen terrorists but quick to proscribe IPOB that is peacefully agitating for freedom.

“Change will come any day Nigerians begin to ask the whereabouts of their First Lady and why she will choose to be away for months without explanations. There will be change when greedy politicians stop putting their selfish interest above the collective interest of the people.