“We Can No Longer Identify With Nigeria” –… 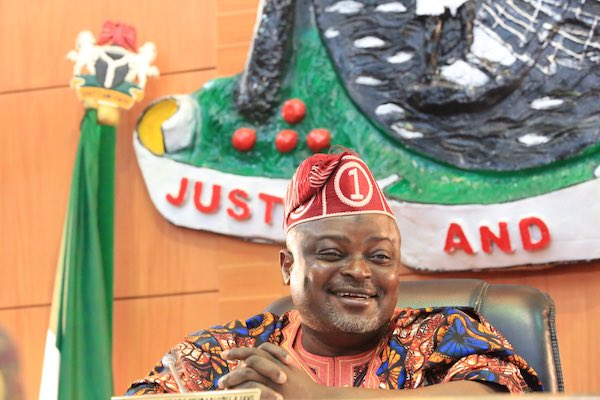 Lagos House Speaker Mudashiru Obasa has been conducting private and lucrative businesses since he was elected to the post in 2015, Peoples Gazette can report, in yet apparent disregard of extant code of conduct regulations for public officials that barred him from running commercial ventures as a top lawmaker.

Financial records of Mr. Obasa’s recently obtained by the Gazette showed how the politician executed a laundry of suspicious transactions using several companies linked to him.

On October 30, 2018, Mr. Obasa received exactly N51,680,672.91 each into his company De Kingrun Multipurpose Limited account in a string of eleven transactions on exactly the same day, bank documents seen by the Gazette showed.

The transactions, totalling N568,487,402.01, were the only activities that reflected on the account throughout that year, indicating that they were proceeds of an unexplained deal executed by the Speaker.

The suspicious funds were received through De Kingrun’s account number 1017424021 with UBA, which did not return a request seeking comments about the transactions.

Sahara Reporters had published a series of corruption claims against the Speaker since March, and the EFCC has called him in for questioning as part of its investigation into the charges. De Kingrun was amongst several companies Sahara Reporters linked to Mr. Obasa, but bank transaction details relating to the politician and his firms are just being uncovered by the Gazette.

Records also showed that Mr. Obasa’s De Kingrun firm has been receiving inflow from the Lagos State government accounts. Mr. Obasa’s telephone number 08033014094 is connected to the account and the Gazette has established through bank sources that he was directly responsible for the transactions.

It was unclear the nature of contracts that Mr. Obasa’s firm carried out for Lagos to justify N357,384,661.08 in eight transactions within seven days.

Mr. Obasa, his media aide and a Lagos government spokesman declined comments for this story. But the Speaker had pushed back against Sahara Reporters earlier in the year.

Although he admitted ownership of De Kingrun as an enduring family business, he rejected reports that the company received contracts from Lagos agencies, demanding through his legal representatives evidence of transactions between his company and Lagos.

On Thursday, the Gazette published bank records of six imprest accounts run by the Lagos State House of Assembly, which showed how Mr. Obasa supervised suspicious disbursements of N9.7 billion in 2019 alone.

Mr. Obasa was elected into the Lagos House in 2007, and has been Speaker since 2015. He should have been handicapped by the code of conduct rules that forbid elected and senior government officials from conducting private businesses, except subsistence agriculture, while in office.

But the regulations have rarely been enforced, despite widespread abuse by politicians and senior bureaucrats. In 2011, Bola Tinubu was arraigned over claims he violated code of conduct rules by operating foreign bank accounts as governor, but the case was summarily dismissed for irregular prosecution.