JUST IN: President Buhari is not my uncle, he is not my…

Zamfara woman arrested for supplying arms and ammunition to… 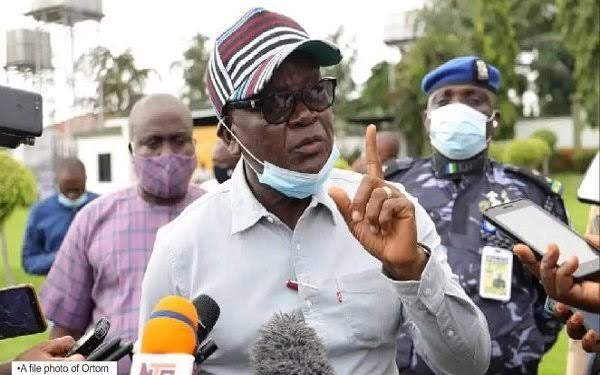 Benue State Governor, Samuel Ortom, on Tuesday asked the federal government to count the state out of its planned rehabilitation of grazing reserves, PUNCH reports.

Governor Ortom stated this while reacting to the earlier statement of the Senior Special Assistant on Publicity and Media to the President, Mallam Garba Shehu, that the federal government was planning to rehabilitate grazing reserves across the country.

Ortom in a statement issued by his Chief Press Secretary, Terver Akase, said that there is absolutely no land in the state that had been gazetted for grazing reserve.

The governor said that his state had since embraced ranching as the best global practice, the policy, he said that Southern Governors Forum and other prominent Nigerians had given their nod.

He expressed dismay on why the federal government is still pushing on what he described as archaic policy, stressing that “it is now clear that there is a hidden agenda which only the Presidency knows.

“Otherwise, all the regions of the country have accepted the fact that open grazing of animals is no longer fashionable and should be banned to pave the way for ranching, yet, the government at the centre is insistent that grazing reserves/cattle routes must be created across the country.

“In Benue, we have embraced ranching as the viable alternative to open grazing and there is no going back on our resolve.

“Our ranching law which prohibits open grazing is Benue people’s reaction to the incessant killings, and it is also an instrument of development. The law was enacted by representatives of the people in the Benue State House of Assembly, in exercise of its powers as provided for by Section 4 of the Constitution of the Federal Republic of Nigeria 1999 (as amended). Part 2 of the Second Schedule reinforces the power of the State House of Assembly providing that “a House of Assembly may make laws for the State with respect to industrial, commercial or agricultural development.” The Law followed due process with public hearings and requisite opportunity for all stakeholders making input.”

The governor said that while the state may not stop the Federal Government’s plan to rehabilitate grazing reserves or create cattle routes in other states, “We wish to make it clear that no land in Benue State has been gazetted for grazing routes, grazing reserves, cattle colonies, and Ruga settlements.

ALSO READ:  "I Least Expected That Kind Of Violent Attacks From IPOB But I Didn't Hold It Against Them" - Ekweremadu Speaks On Attack In Germany

“Benue is, therefore, not part of the grazing reserves rehabilitation programme of the Federal Government.

“We expect the Federal Ministry of Agriculture to weigh the negative consequences its recommendation will have on the unity and security of the nation and advise Mr. President that Nigerians are not on the same page with him regarding the matter of open grazing. It is not too late to salvage the situation.

“The fact must be established that grazing reserves or cattle routes are no longer tenable in the 21st century when Nigeria’s population far exceeds that of the fifties at a time these routes were contemplated.

“At present, the routes have been taken over by airports, roads, schools, hospitals, as well as markets, houses, and other human activities. The country’s landmass has also reduced to less than 923 square kilometres with the excision of Bakassi to Cameroon. Besides, the international best practice of animal husbandry is ranching; and that’s the stand of Benue State.”

Ortom stated further, “Ranching as a policy has the potential to launch Nigeria into 21st-century agricultural good practices. Today, open grazing is extinct in most countries of the world. In Europe, America, Asia, and in many countries in Africa, pastoralism has long given way to ranching.

“How can Nigeria then still be battling with a problem of pastoralism that in other countries has been solved over a century ago? According to the United States Department of Agriculture, USDA, India has 303 million cattle, Brazil, 226 million, China, 100 million, USA, 93 million, Argentina, 53 million, and Australia 27 million. All these countries ranch their animals. Nigeria has less than 20 million cattle which can easily be ranched. Unfortunately, the cows are allowed to either roam the streets freely or encroach on people’s farms and other investments.”