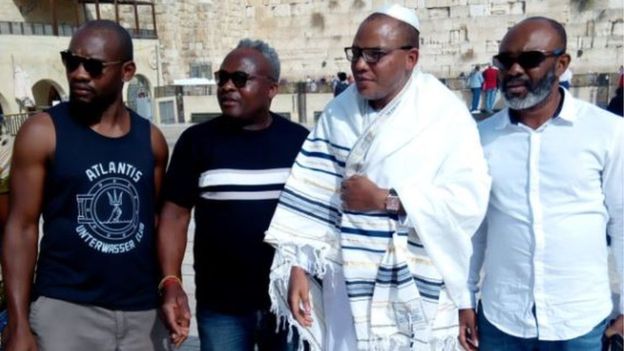 The evolving violent approach adopted by the Nigerian government to quell every peaceful agitation as clinically revealed by Mazi Nnamdi Kanu, the highly intelligent and enlightened leader of the Indigenous People of Biafra (IPOB) worldwide, is a comprehensive education package for every sane being. Nobody needs to seek the services of any prophet to dissect the similitude of the ruling class whenever it gets to clamping down on legitimate and non-violent agitators. History has it that Nigerian authorities never toed the path of  dialogue in diffusing  avoidable tensions that had arisen following peaceful and rightful demands of the people besides despotic show of force.

There exists chronicles of illicit and callous clamp down of peaceful agitators right from the likes of Kenule Saro-Wiwa, Gani Adams, to many others whom the officials of the Nigerian government had grossly persecuted and killed, instead of  conscientiously listening to their cries for enduring solutions.

Regarding the Boko Haram question for instance, a personality like Olusegun Obasanjo who presided over a regime in the country when this group sprang up, most definitely has a lot to tell. If really the global community is sincere to decipher what really precipitated this menace of a deadly terrorist group in the Northeastern part of Nigeria today, quite a lot will be surprisingly discovered.

ALSO READ:  JUST IN: We’ve been vindicated by Buhari’s refusal to participate in debate —IPOB


The violent disposition of the Nigerian armed forces against the civilian population did not start today.  Recall the criminal massacre in Odi, Zaki Biam ethnic cleansing, Asaba/Isheagu massacres, killing of Massob members, the persistent decimation of Shi’ite  religious sect faithfuls and of course, the despicable annihilation plot targeted against world recognised most peaceful/organised/enlightened indigenous mass movement known as the Indigenous People of Biafra (IPOB) globally, ably led by Citizen Mazi Nnamdi Kanu. The evil military expedition code named “Operation Python Dance II” particularly, saw a record number of over twenty eight (28) promising young Biafrans, gruesomely killed on broad daylight at Afara-Ukwu Ibeku in Umuahia, Biafraland,  in a heinous attempt to kill Mazi Nnamdi Kanu, a law abiding, non-violent, courageous and dependable freedom fighter in his father’s compound, with other valuables worth millions of United States dollars, wantonly destroyed.   Ironically though, discovery has been made that “the only language the Nigerian government understands, is violence”,

Nnamdi Kanu. Unfolding events point to the fact that Nigeria government pays heed only to armed violent groups or militants like Boko Haram after shamelessly testifying of it’s weak and difficult confrontation against this group with a corrupt and unprofessional military. This formed the basis why the era of the so-called Niger Delta militancy was accorded much attention than any other violent agitating group across the country.  This perhaps hinged on the very lucrative oil and gas deposits in the area.


However, the violent responses of the “all time Nigerian terrorist military”, have far consumed thousands of harmless indigenous victims including children, women and men. It is factual that the Nigerian armed forces’ violent responses to non-violent and legitimate civil demands, result in devastating, violent, stronger and monstrous army of terror that in turn, vent their anger on the country, with records of avoidable loss of military men. Yet, it is the indigenous civilian population that bears the brunt.

A situation where the Nigerian army gets the directive to wipe out an entire community for the death of a soldier, even in the so-called democracy, leaves a sore taste. This has been a recurring decimal across regions in Nigeria


The current experience in the Northeast region, is a corresponding effect of illegality instituted in the administration of Nigeria. The extra-judicial persecution and eventual killing of Mohammed Yusuf, the founder of Boko Haram, says it all.

The man and his group were peacefully agitating for an independent Sharia State from Nigeria, with absolutely no attachment to Western kind of education, culture and religion. But instead of the Olusegun Obasanjo led Nigeria government’s civilized approach to the matter, Yusuf was arrested,  detained, tortured and eventually extra-judicially killed. This dastardly act of the government, precipitated the spate of the seeming endemic terrorism onslaught ravaging the Northeast region of Nigeria today, with accompanying destruction of lives and properties.