BREAKING: IPOB Women Took A Surprise Swipe On The FG, This… 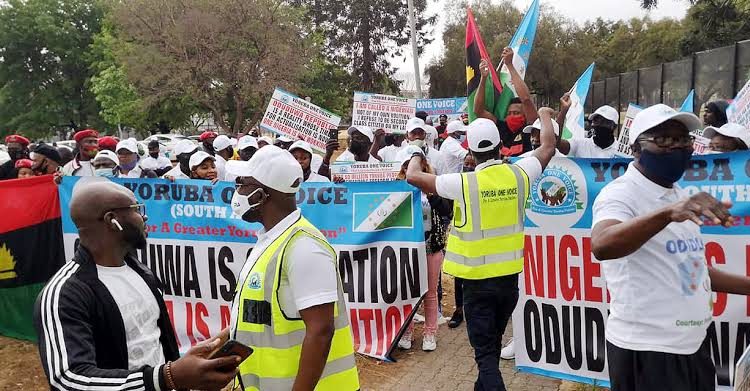 The Southern Youth Forum, SYF, has called on residents of the southeast to defend themselves against what it describes as state-sponsored ethnic cleansing.

Dezia Kue, a spokesperson for the group who disclosed this in a chat with OAK METRO on Friday, said the current administration headed by President Muhammadu Buhari had declared war on the people of the southeast over the quest for Biafra.

Kue also accused the governors of the southeast of compromise and aiding the illegal arrests and massacre of Igbo youths.

“Ask yourself why the federal government is deploying soldiers and military equipment in the southeast if not out of hatred of the people and the quest to eliminate the Igbos because they say they want Biafra,” said Kue.

The SYF general spokesperson, who also condemned the attack on the Nigerian Defense Academy in Kaduna, said people would have been killed by the military after the incident had it occurred in the South-East.

“You saw what happened in Kaduna, the Fulani attacked the NDA, killed a major and kidnapped another. If this incident were to occur in the south-east, the villages will now be set on fire, many people will be arrested and killed in dozens. But this is not happening because the Fulani committed this terrorist act.

“The governors of the south-east have made compromises, they are aiding the illegal arrests and the massacre of Igbo youths. They are not ashamed!.

“You heard what IGP Adamu told police officers in Delta, he told them to hunt and kill IPOB members, 95% of IPOB members are Igbo youths, now you understand what that means. I call on the people of the southeast to defend themselves because there is no doubt that the federal government has brought war to the Igbo people,” Kue said.