BREAKING: Fani-Kayode Reacts To The Release Of Nigerian… 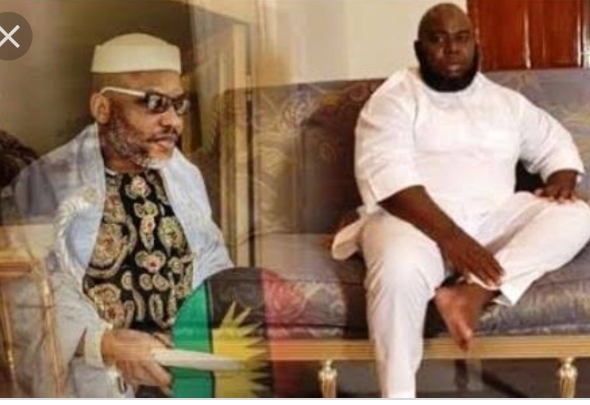 In a statement made available to SaharaNews on Friday, Kanu described Asari as a compatriot who made his own contributions to the restoration of Biafra.

Read the full statement below,

“My appreciation to all those who are still in the struggle to restore the lost sovereignty of the Biafran people as a result of British imperial ambition of which Nigeria is one of her disastrous creations.

Let me start by asking everyone to observe a minute silence for all those who died to protect and restore the sovereignty of the Biafran people from the British & Fulani colonial ambition.

Although silence is golden but there are times it is necessary to talk before things go haywire.

Of recent, our dear compatriot Alhaji Asari Dokunbo whom we know had made his own contributions to the restoration of the sovereignty of the Biafran people had raised issues worth addressing and in order to avoid an unnecessary distraction and to keep the struggle focused on the goals we set out to accomplish, I thought it wise to address the issues raised .

The issues raised by our dear compatriot are

1) I ordered the murder of a cleric.

2) I collected money from Atiku.

4) That I am a scam & fraud in the Biafran struggle.

I will take my time to address each point one after the other and later, indulge our dear comrade to reveal to fellow Biafrans what he thinks should be done differently in order to achieve Biafra’s restoration.

1) I never ordered the killing of any cleric and if anyone thinks I did, he or she should provide evidence that, I wasted Biafran resources to kill a fellow Biafran whose death can not help IPOB to restore Biafra.

2) I never collected money from Atiku and if anyone is in doubt, let him or her approach Atiku for answers. Both PDP and APC agents approached me and told me to give up the struggle for Biafra and I told them that, IPOB will only do so if the following things will be fulfilled:

a) Full Resource Control and not mere 13% derivation.

b) Opening of at least 2 deep seaports in Akwa Ibom, Cross River, Rivers, Bayelsa and Delta States starting with the construction of Ibaka, Ibeno and Bakassi deep seaports.

c) The establishment of international airports and inland ports in all states of the defunct Eastern and Mid West regions in order to emancipate Biafra land from economic strangulation.

e) Full autonomy to all Biafran states in the areas of security, taxes, royalties, legislations etc

We lifted the boycott of election because, both parties agreed to our terms & conditions.

If we are wrong to give the Nigerian elites the opportunity to fail themselves, let the Biafrans voice out.

3) It is very disheartening that such a great compatriot like Alhaji Asari Dokunbo will descend so low to call one of the Ethnic groups of Biafra land slaves and another masters.

Throughout the history of the Biafran people, never was it recorded that any ethnic group invaded others and enslaved them.

The Igbos being the largest of them, were neither subjugated nor subjugated other people.

Yes it is true that, lots of Igbos were sold as slaves but it was done by fellow Igbos notably the Arochukwu slave traders through the coastal nations who acted as middle men of which Ijaws were one of them.

Alhaji Asari Dokunbo can enlighten the Igbos which Ijaw King or War Canoe Chief left the creeks in order to conquer and enslave the Igbos in the hinterlands of Biafra land.

The Biafra we seek to restore is still the same that encouraged the peaceful coexistence of all ethnic nations which led to the creations of multi-ethnic-cultural communities notably Arochukwu, Abiriba, Igbanke,etc.

If Alhaji Asari Dokunbo wants a Biafra of Master – Slave relationship, then he is free to create one but we won’t be partners in such a project.

The Biafra we seek, is one based on equal rights & privileges and not on Master – Slave relationships.

4) Alhaji Asari Dokunbo, you said I am a scam and fraud. I will be grateful if you can provide evidence of me diverting the contributions of fellow Biafrans for my personal use.

Remember that, only a stupid fraudster will dare confront Jubril.

May Elohim be the judge if I am a fraudster and should expose & replace me if I am guilty in His sight.

Alhaji Asari Dokunbo, we have come so far and we should not allow our oppressors to continue to divide and conquer our oppressed people.

If You Think My Style Of Struggle & Leadership Will Not Get Us Biafra, Kindly Tell Fellow Biafrans The Way Forward So That, They Can Join Your Rank and File With My Full Support & Blessings.”