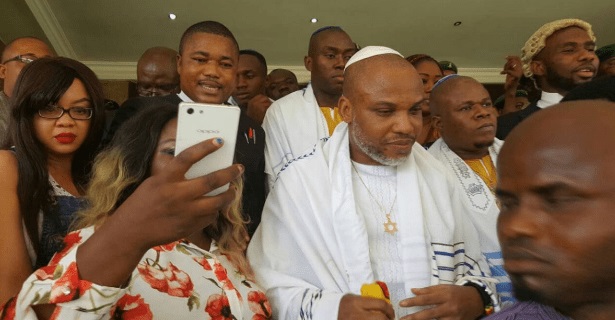 Let us see how boycotting of election come 2019 will make an international community give us referendum for Biafra.

To start with, we are not boycotting for UN to give us referendum the following day. Boycott is just one among many things we must do for freedom to be achieved. Believe me, fighting for freedom is not a child’s play. And there is no one thing you will have to do for it to come. You need to develop the right spirit, if you really need this freedom. You need to understand the meaning of struggle.   Some ask what happened after we boycotted Anambra election.

They say Nigeria still called result and a Governor emerged. They said same will happen even if entire Nigeria boycotts 2019 presidential election. And they are not worried. It is not in anyway giving them concern that if they all boycott, their government will still declare a winner. Is that not a rogue government? Shouldn’t they be stopped? But sadly, like a defeated people they chose to vote as to validate the rigging they nicknamed election.


Listen, when we took the option of a boycott, we know exactly what Nigeria is made of. Boycott is one among many revolutionary actions we will continue to apply until we get referendum. So stop telling us we will see if UN will give us referendum. That is an insult to the word struggle.  You did rather tell us why you have decided to continue voting with nothing to show for it. Nigeria is a country that opens the earth, brings out crude oil and sell.

For 68years Nigeria has been selling this oil. They produce nothing other than this oil. Countries that discovered oil have use it to develop their nations. Is it Dubai, Qatar or Saudi Arabia? They are supper developed. For more than two decades, soldiers kept toppling themselves and ruling you. When they finally gave you back democracy, they forced Obasanjo,  a fellow soldier on you. Also they made sure an Atiku Abubarka, a para military becomes his deputy. After them, came a Mohammad Buhari, a soldier who even led a coup against a Democratically elected President.


You all in your voting, voted in a destroyer of democracy. A renowned failure. He came, destroyed everything, killed with reckless abandon. Now you all are bent on replacing a fake Buhari with the same para military that was merged with Olusegun Obasanjo. Aren’t you people tired of doing the same thing again and again?  Are you not tired? For 68years of free oil sell, you have no constant electricity. You have no job. No housing, no water and no infrastructural development. You die because there are no good hospitals around, while your politicians and their family members travel abroad for medical check up.


You earn 18k while a senator earns 13million  per month. They leave education to die and make you jobless after school, yet you are here dancing naked, campaigning for same politicians that destroyed the nation. Isn’t that shameful?   We will boycott 2019 election. We will not vote, because voting has been proven useless in Nigeria. Those asking you to vote are either ignorant or they are about cashing in to join the looting family of politicians.  Join the boycott team or continue being a slave in the land  of your forefathers.

JUST IN: This is one thing Lai Mohammed will never be comfortable with.

JUST IN: This is the real me, I am not cloned – Buhari speaks from Poland