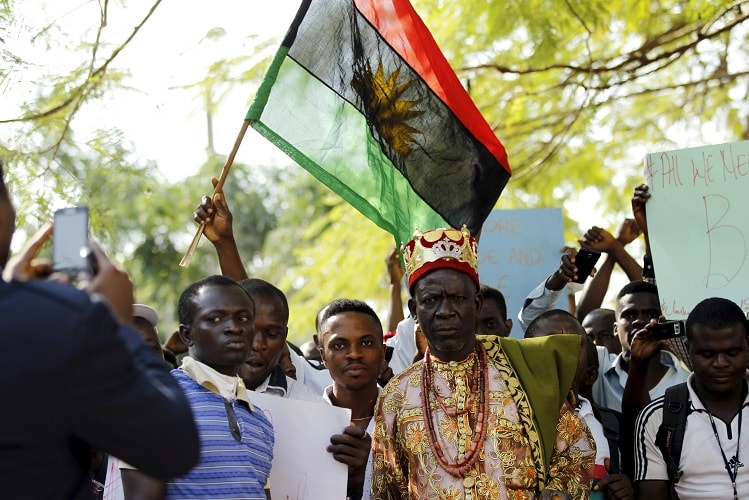 SAHARANEWS – The Indigenous Peoples of Biafra (IPOB) on Wednesday, warned the sacked Ohanaeze Secretary-General, Uche Okwukwu, to desist from being a willing tool in the hands of the enemies to sabotage Igbo and Biafra interests because of pecuniary gains.

In a swift reaction, Okwukwu described the IPOB leader as a charlatan and inconsequential character who has nothing to offer Ndigbo.

In a statement signed by the IPOB Coordinator in Igweocha, Rivers State, David Njoku and made available to the Nation in Owerri, the group described the action of the former scribe as rather shameful saying that for somebody who once prided himself as a MASSOB member and the Secretary-General of Ohanaeze Ndigbo to suddenly make himself a slave to his Fulani masters to sabotage his own tribe was unimaginable.SUGGESTED NEWS

ALSO READ:  JUST IN: "Stay Away From Home For Now" - Igbo Group Begs Nnamdi Kanu Not Show Up At Parent's Burial

“Instead of him to hide his face in shame to witness against his fellow MASSOB members in the Federal High Court Abuja years ago, Uche Okwukwu has been shamelessly dishing out press statements against Biafra and Igbo interests in his quest to please his pay masters in Aso Rock,” the statement alleged.

“We know his antecedents as a saboteur which also led to his sack from MASSOB in 2001. We are wondering why Nigeria media and some journalists would still allow someone who has no locus standi in Ohaneze Ndigbo to further rubbish the name of Ohaneze Ndigbo.

“We are warning him to henceforth, desist from making derogatory remarks against Biafra and IPOB or be ready to account for his sins on the day of reckoning.

“It has also come to the knowledge of IPOB that Uche Okwukwu and his co-travellers are making wasteful efforts to use IPOB to make a selfish bargain.”

The statement advised the ex scribe to retrace his steps and disembark from such fruitless journey because “IPOB is unstoppable in its divine march towards Biafra restoration.”

Reacting, Okwukwu described Nnamdi Kanu as a charlantant and inconsequential character who has nothing to offer Ndigbo.

“The IPOB is destroying the struggle of our people for emancipation and liberation that can only be championed by a very serious minded character not by people who have no understanding, ‘ he told the Nation.

Okwukwu who claimed that he has not been sacked, noted that as an Ikwerre man from Rivers State he had been in the forefront to unite Ndigbo, adding that Kanu believes only in using radio to insult and abuse people, appealing to the sentiments of hawkers and pedestrian traders.

“This is a man who said the President is dead, he was cloned, he is Jubril, and yet the President is still ruling, still talking and the same Muhammad Buhari that has been known in the last 70-80 years. I will continue to support Buhari.”