BREAKING: 23 Nigerians To Be Executed In Saudi Arabia For… 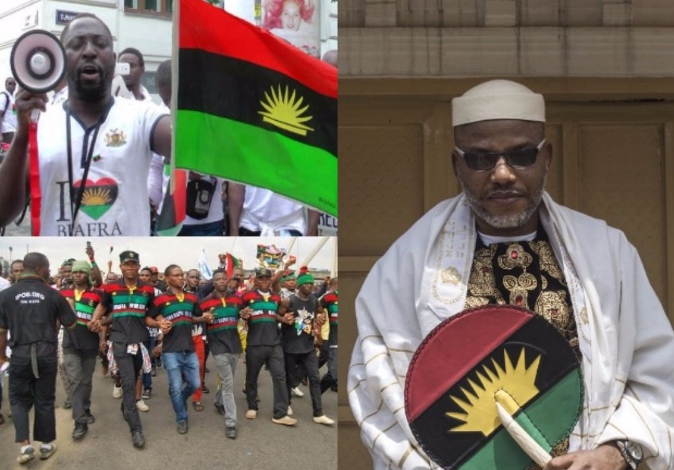 SAHARANEWS – The enigma championing the current restoration quest of Biafra, Mazi Nnamdi Kanu, on Wednesday the 18th day of September 2019, scored yet another mark as he led a delegation of Biafrans to an all-important meeting with United Nations officials at Geneva.

Accompanied by his deputy, Mazi Uche Okafor Mefor, Head of Directorate of State, Mazi Chika Edoziem, Head of Finance, Lady Nnennaya Anya, and other top echelons of the struggle, Kanu presented Biafra plight to the United Nations officials, demanding support for a free state of Biafra.

Emerging from the meeting yesterday the 18th of September, Kanu met a congregation of Biafrans who, on seeing their leader, began to chant his eulogy. Addressing the jubilant crowd, Kanu said, “Every issue concerning our people is now before the various arms and agencies of the United Nations. Our case will no longer be ignored.”

ALSO READ:  BREAKING:Gunmen Abduct Locals And Throw Them Off A Bridge In Anambra. (See Photos)

illegal detention of unarmed agitators, flagrant contempt of court orders, and  incessant abduction and extrajudicial killings of IPOB family members … all of which form the basis of the agitation for the separate state of Biafra which, in earnest, was existing before the Lugardian amalgamation of 1914.

Exploiting the rights of indigenous people to self-determination as provided by the UN charter 2007, Mazi Nnamdi Kanu in his charisma has conscientiously pursued freedom for the oppressed people of Biafra. Presenting the aforementioned matters to the UN with presumably offers for a better deal than the failed Nigerian State can strike, Kanu and crew seem to have wrecked the Nigerian boat. Certainly, he must have gotten reassuring promises to have told his followers that they will no longer be ignored.

“We Will Never Allow Nigeria Break Up, Usman Dan Fodio Fought For It, Ahmadu Bello Expanded It, Buhari Is Completing It, One Nigeria Will Remain Your Nightmare” – Alhaji Gwarzo