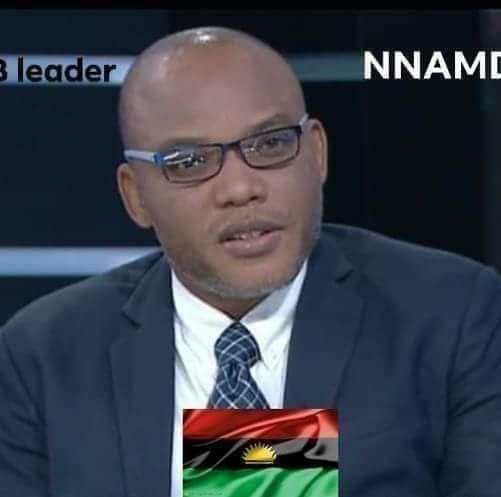 This is a very monumental lecture this evening. Get your pen and paper ready.If you are not listening to Radio Biafra tonight and always, then there is something fundamentally wrong with you.

I will disintegrate Nigeria with the truth, nothing more. Why didn’t Jubril attended the Paris Conference?   Jubril is a fraud from Sudan. The zoo must fall. I am giving them time to remove Jubril, and give us referendum to go in peace or the zoo will  collapse in pieces. If Buhari-Jubril was at the Paris conference, why did they release fake pictures instead of videos of the conference?

*Why can’t Nigerians demand to know where Buhari-Jubril attended his own Conference?

In those days if you lie in Biafra land, you die. When someone lies, he’s covering something. The Yoruba media is a disgrace to journalism.   No right thinking Journalist will accept money to suppress the truth as Yoruba medias are doing.

The cabals avoided the Conference because they knew the world leaders were waiting for Jubril, they were ready for him, including the foreign medias to ask him some questions, but he could not summon the courage to attend. The Journalists even Vanguard refused to write against this lies but covered it. If the cabals remembered how Babangida killed Dele Giwa, may be, they would have sent me a letter bomb to kill me to hide the truth, instead of sending a battalion of their soldiers.


You are calling a Sudanese man you did not vote for, “his excellency” Unbelievable! Jubril is not even registered to vote, yet some of you want to go and vote for him. Why can’t Nigerians ask themselves,  why was the presidency lying about the world conference in Paris that Buhari-Jubril did not attend?  What are they hiding?

How come Buhari is now shorter than Bukola Saraki? How come Aisha Buhari cannot go to see her husband again in Aso Rock? How come Yusuf Buhari came back from surgery and the alleged father was shaking him like a visitor and a stranger from afar? Nigerians cannot remember that again, Nigerians are gullible!  Tell Jubril to remove his hat, put on suit, and speak Fulfude. Have you seen Jubril being interviewed anywhere in Nigeria?

This fake man cannot speak Fulfude  Go to the fake pictures Femi Adesina posted and check the pin up Jubril wore in April when he went to a commonwealth conference in London, that was where he took the pictures Femi Adesina posted on Facebook, it’s the same picture. Where did he get his own pin up because the pin up on his cafetan was different from the pin up other world leaders wore in that Paris Conference?  Buhari’s name was not in the list of the people that attended the summit in Paris which was published and sent to the Press.

The dead Buhari had gap teeth, but the new shine shine bobo do not have any.”Chai, Jubril emem aru!” When we busted their lies, they started showing pictures of Jubril meeting few Nigerians in France where camera was not allowed. How come you did not see Macron with Jubril, but you saw the real Buhari’s picture with Theresa May when he was alive?  I am asking BBC to go to Femi Adesina and compare the pin up picture Jubril was wearing at the so called Summit and compare it with the same picture the real Buhari took with  Theresa May when he visited her. Buhari-Jubril did not attend that conference in Paris! We were watching CNN, Aljazeera, while Femi Adesina was busy photoshoping pictures.

Femi Adesina is a liar and a cheat without conscience  Why did Yoruba media practitioners forced Jubril on the people by helping the presidency to cover the truth?  The media in Nigeria is populated by cowards and can cover the truth as long as you give them money.  I’m beginning to believe it’s Femi Adesina that forged WAEC certificate for Kemi Adeosun  Since Yoruba and Arewa like forgery and forging certificates, they should be in the same country and forge themselves and leave Biafrans alone.

There is no Biafran politician that has been accused of certificate forgery. I commend them for that even though they are useless.   I don’t know why Yorubas hates Biafrans, they hate IPOB, I don’t know why, except Fayose, Pa Adebanjo and my friend Femi Fani-Kayode  Who is that person the presidency of Nigeria is hiding that they don’t want the world leaders to see?  Why did NTA not cover Buhari-Jubril speech if he attended the Paris Conference?   Jubril was not in Paris, but channel TV and Nigerian Yoruba Newspapers were busy lying and deceiving Nigerians.

I pity people who watch and listen to Channels TV. I want Nigerians to bow down their heads any time they see IPOB members. Go and ask Bukola Saraki why he said Atiku will win because he’s a Nigerian? Does it mean the so-called Buhari is not a Nigerian? Do you know that the whites see black people as liars, because of what Nigerian Journalists are writing? Jubril went to Picasso exhibition in France, and no one was allowed to take pictures of him.

These miserable Fulanis wants you to renew your slave certificate again with PVC. A Sudanese man is presiding over the affairs of Nigeria, while their Yoruba son is there.  Having an impostor in Aso Rock is a crime. Aso Rock cabals led by Abba Kyari just called you all fools by imposing a foreigner on you all as your president. Show us a video of Jubril shaking hands with any world leader at the peace summit in Paris  Some village palm wine tappers are more  sensible than the so called PhD holders in Nigeria.

Every world leader went to the amnesty commemoration in Paris with their wives. Why didn’t Buhari attend with Aisha if Jubril is her husband? They said Obiano accompanied the President to Paris, but it was the same Obiano that was seen welcomed him. It is no longer Rochas Okorocha, it’s no longer Dave Umahi, the new darling of the cabals is now Wilie Obiano. Why didn’t NTA cover the arrival of Buhari? All of a sudden there is no more fanfare. They did not cover it because it is not Buhari. Buhari is dead.

I will bring you the final episode Live on television with experts to unveil Jubril, because there are things we need to show you on Live television. I don’t know when, but we are on it. Until they do otherwise by giving us a referendum, Nigeria will go down


Mamman Daura said we have tolerated this Kanu a lot for insulting our leader.Mazi Nnamdi Kanu said, but your leader is dead and buried in a shallow grave without honour.   Buhari bowed to the German soldiers when he visited Germany before he died. Aisha Buhari cannot travel to the USA, she will be arrested because she was involved in a Halliburton fraud. Jubril is going through more reconstructive surgeries to look more like Buhari.

Questions for Mamman Daura Buhari’s uncle. It was reported that AU stood up for a minute silence for Buhari, are you going to jail AU leaders? Where did the presidential jet that left Nigeria travel to? Why did Atiku said he cannot contest with a foreigner? Why haven’t they asked Rochas Okorocha what he meant by if I open my mouth Nigerians will burn down Aso Rock?

It is that Buhari is dead and it is Jubril that is in Aso Rock ruling you all. Nigeria has no President, they are being ruled by proxy backed by Britain to cover the fraud. What this Jubril saga has done is to expose the whole Africans as people with low reasoning. Nigerians has grown to love the criminals and murderers that governs them. There are people in APC who have refused to speak the truth, they asked for political gifts to be quiet.

APC has committed an abominable crime. They should all be publicly killed by a shooting squad. Jubril should be in prison not in Aso Rock. Jubril didn’t attend the summit in Paris due to fear of being arrested by Trump. The whole world listens to Radio Biafra. We are the best. When I was here years ago we were the No 1 listened Radio in the world and now I am back, we shall be No.1 again.

If I want to check how Africans behave I watch Animals in Zankiti. I want everyone to watch the movie called “Jango unchained” Buhari told Youth Corps members that over his dead body will Biafra come. He died and was not given a honorary military burial by a country he fought for. This is what wickedness can cause. The purpose of building a nation is to have a defined structure and focus for speedy development.

The institution of sharia in Nigeria was the end of Nigeria. These things I have told you, take it to heart and digest it and as God will graciously help us we shall meet again same time next week if need be. Until then may God bless you as you do everything in your little corners to ensure the speedy restoration of Biafra. God made us a promise and he will fully restore Biafra without doubt. Remain Blessed and Good night.  … Mazi Nnamdi Kanu (Supreme leader) Ind
igenous People Of Biafra (IPOB) Worldwide.