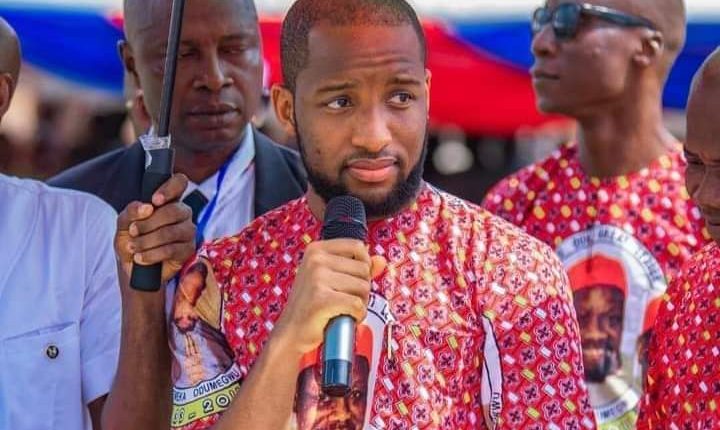 10 years ago, when my father, Ikemba, Eze Igbo Gburugburu left us, I was a child. Yet, I can never forget the outpouring of love that you, Umu nne’m, showed him. In life and in death, you stood with him.

Since that fateful day 10 years ago, Okenwa, who in life took the baton of fighting for our people from Eze Igbo Gburugburu, took it upon himself to celebrate him year after year. As he honoured the Ikemba in life, he continued after his mortal life was over.

In these almost 10 years, no state Governor in the South East has done this incredible and noble task, despite the fact that Eze Igbo Gburugburu was our leader through a war to save us from the genocide that faced our people.

Okenwa, a son in Ikemba’s life, has remained a son…never forgetting, never flagging , and never deviating from this responsibility.
Today, we live in a world where many prefer to forget the battles which were waged to bring us this far, the sacrifices of so many in this unrelenting quest to end our marginalisation and the continued fight for a just and equitable state that we can live in without oppression. Nobody without passion for his people and a spirit of sacrifice can lead us to the Promised Land, no matter how genuine their intentions are.

Today, as we remember the passing of my father, let us celebrate our resilience as a people. Biafra remains the only country that required the combined effort of three of the greatest superpowers to come together to subdue, it remains the first country where starvation was employed as an instrument of war . Even then, this remarkable country survived for three whole years.

The ingenuity of our engineers gave birth to ‘ogbunigwe’ – a multiple re-entry missile. We refined our own petrol. Our school system worked uniformly and was never interrupted during the entire period of the war. We had order ….and when compared to the situation we are faced with today , I think we can look back and say that we, as a people, are incomparable.

As we mark this 10th year anniversary, Ndi B’anyi, let us look back and look deep. Let us rally round and remember the vision planted so long ago.

Let us also continue to honour all our loved ones who lost their lives during the War. And never forget the foreigners who left the comfort of their homes to fight for us and with us. We can never forget all the countries that came to our aid, provided refuge and support in our time of need.

We remember BRUCE MAYROCK, that young man, even younger than me, who took our plight to heart, so much so that he gave his life for us, just to make the world look and see the evil being perpetrated against us. We will never forget.

I also can never forget that this land, Owerre, is the land that received my relatives and my kindred when they fled for refuge during the war. This land received its brethren from other parts of the East as they fled for their lives. And most importantly We must never forget our brethren who remain in captivity today for our cause. We pray God to come to their aid.
It is indeed a privilege to be here today.
Owerre bu oke mba !

Speech delivered by the Chairman of the event, Engr Afamefuna Odumegwu Ojukwu.