Court Compels Oyo-Ita To Forfeits Assets To FG Over Alleged… 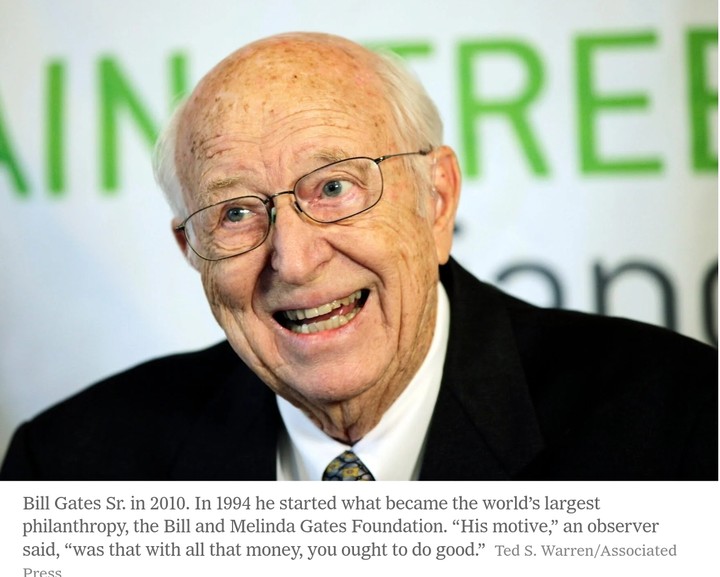 Bill Gates Sr., a lawyer and the father of Microsoft’s co-founder, who stepped in when appeals for charity began to overwhelm his billionaire son and started what became the world’s largest philanthropy, the Bill and Melinda Gates Foundation, died on Monday at his beach home on Hood Canal, in the Seattle area. He was 94. 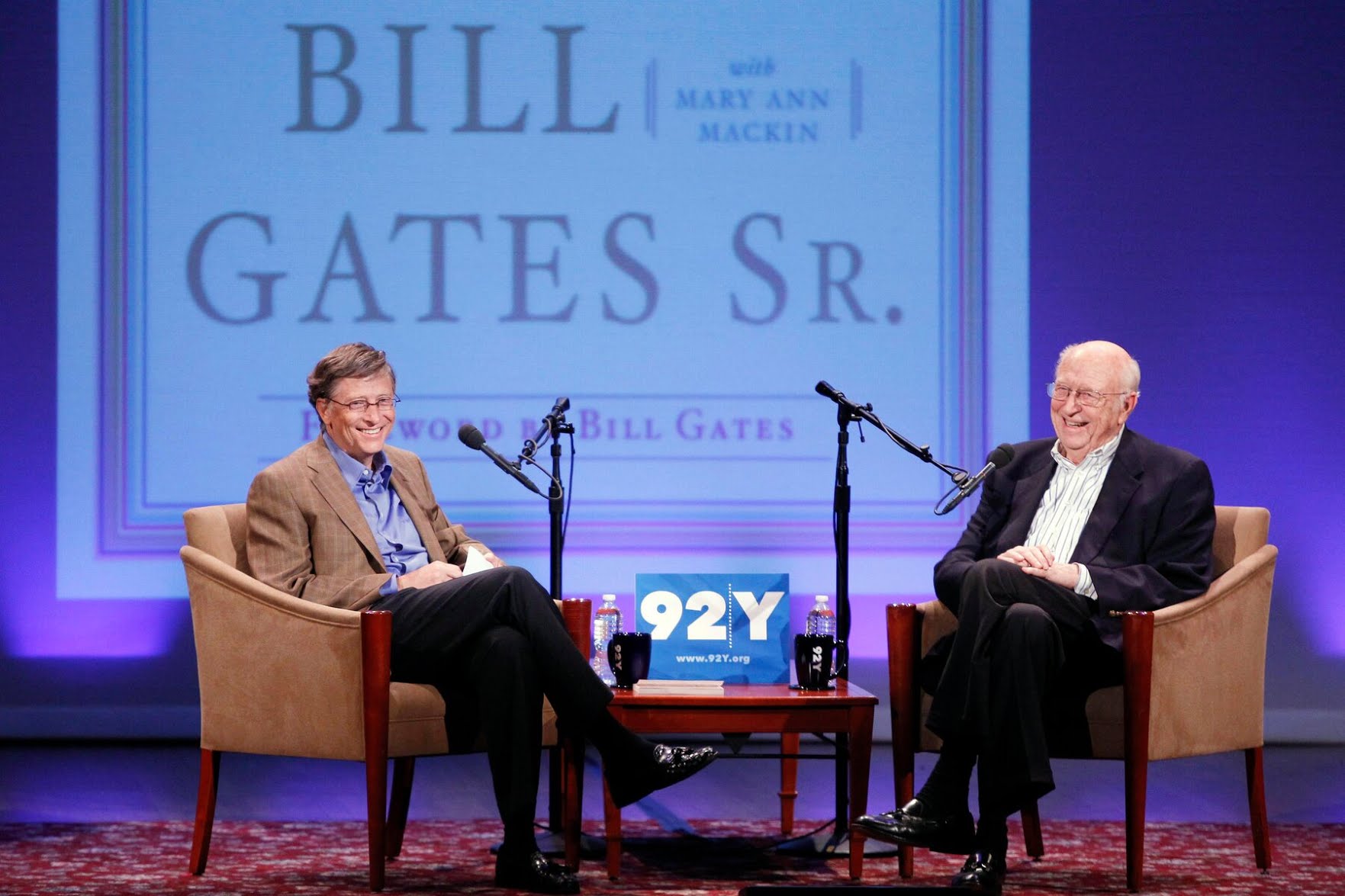 The cause was Alzheimer’s disease, his family said in an announcement on Tuesday.

In 1994, Mr. Gates was 69 and planning to retire from his prestigious law practice in a few years when, one autumn evening, he and his son, Bill, and his daughter-in-law, Melinda, went to a movie. Standing in the ticket line, Bill told his father that he was being inundated with appeals for charity but that he was far too busy running Microsoft to answer them.

His father suggested that he, Bill Sr., could sift through the paperwork and, with his son’s approval, send out some checks. Bill Jr. agreed.

What Mr. Gates Sr. found later were dozens of cardboard boxes filled with requests for money, many with heartbreaking stories of need. A week later, Bill Jr. set aside $100 million to open what was initially called the William H. Gates Foundation. His father, sitting at his kitchen table, wrote the first check: $80,000 for a local cancer program.

Over the next 13 years, while Bill Gates focused primarily on Microsoft, his father managed the foundation day to day, conferring with its executives and philanthropic experts, sending his son lists of proposed grants, writing checks and shaping the charity’s major goals: improving health and education and alleviating poverty in America and the third world.

“I consider Bill Gates Sr. the conscience of the Gates family,” said Pablo Eisenberg, a columnist for The Chronicle of Philanthropy. “He was instrumental in not only starting the foundation but growing it, and his motive was that with all that money, you ought to do good.”

In 2000, Bill Gates and his wife combined three family foundations and donated $5 billion in stock to create a successor charity, the Bill and Melinda Gates Foundation. Mr. Gates, his wife and his father became co-chairs of the new entity, although it was still being managed by Mr. Gates Sr. In many respects, the modern foundation still dates its inception from his first check in 1994.

With Patty Stonesifer, who bridged the old and new foundations as chief executive from 1997 to 2008, Mr. Gates Sr. channeled support for campaigns to eradicate polio, reduce infant and maternal mortality, build schools, foster an agricultural revolution in Africa and invest in technology that created savings accounts for impoverished farm families. Under him, the foundation also gave hundreds of millions to the search for a vaccine to control AIDS, the spectrum of often-fatal conditions caused by H.I.V.

“An enormous part of his contribution was not only the strategic focus and the institutional structure of the foundation, but he helped establish the principles we worked by,” Ms. Stonesifer said of Mr. Gates Sr. in an interview for this obituary in January. “He was a daily reminder that just because you have the checkbook doesn’t mean you have the knowledge or the experience on the issues we are trying to address; that we need to listen to the people who have the experience and the knowledge.”

Bill Gates Jr. credited his father with the early success of the foundation. “I make sure the resources are available, and he works to wisely spend the money,” he told The Seattle Times in 2003.

A prominent Seattle lawyer with heavy civic and professional obligations, Mr. Gates Sr. had largely left to his wife, Mary, the duties of raising their two daughters and one son, Bill, who, all agreed, became insufferably argumentative as a boy — resisting his mother’s requests that he clean up his room, that he stop biting his pencils and that he sit down to dinner on time.

Their test of wills exploded one night at the dinner table, with Bill shouting at his mother in what he described years later to The Wall Street Journal as “utter, total, sarcastic, smart-ass kid rudeness.” In response, his father, in “a rare blast of temper,” The Journal wrote, threw a glass of water in his son’s face.

Young Bill was taken to a therapist, who advised his parents to ease off on discipline. They sent him to Lakeside, a private prep school in Seattle, where he had access to computers. There he met Paul Allen, a student computer whiz.

Years later, the parents acquiesced when Bill quit Harvard and moved to Albuquerque, where he and Mr. Allen founded Microsoft in 1975.

Microsoft grew into the world’s largest personal computer software company. Its 1986 public offering turned its founders into billionaires and 12,000 employees into millionaires. It became one of America’s most valuable publicly traded companies — the third, after Apple and Amazon, to reach the magical trillion-dollar market capitalization.

“I never imagined that the argumentative young boy who grew up in my house, eating my food and using my name, would be my future employer,” Bill Sr. told the Seattle Rotary Club in 2005.

Bill Gates Jr. announced in 2006 that he would give up his daily role with Microsoft over a few years, allowing him more time to work with the foundation.

Weeks later, the financier Warren Buffett pledged to give annual gifts of stock in his company, Berkshire Hathaway, to the Gates Foundation for the rest of his life. Through 2018, his gifts totaled $24.6 billion, sharply raising the Gates endowment and charitable initiatives.

By 2008, when Bill Gates Jr. began working full time at the foundation, his father’s role had begun to diminish after 13 years as the only family member with a daily presence there. For the first time in their lives, father and son were working together. Both were strong-willed executives, but there was no question who was the boss.

“At s6-foot-6, Bill Gates Sr. is nearly a full head taller than his son,” The Journal noted. “He’s known to be more social than the younger Bill Gates, but they share a sharp intellect and a bluntness that can come across to some as curt.” The Journal added, however, “He isn’t prone to introspection, and he plays down his role in his son’s life.”

While Bill Sr.’s family was not poor during the Depression, his father, who owned a furniture store, would pick up coal that had fallen off delivery trucks and take it home to heat the house. William attended local schools and was in the Army from 1944 to 1946, rising to first lieutenant in the occupation of Japan. He went to the University of Washington on the G.I. Bill, graduating in 1949, and earning a juris doctor from its law school in 1950.

In 1951 he married Mary Maxwell, a Seattle civic leader and longtime regent of the University of Washington. Besides Bill, they had two children, Kristianne and Libby. Mary Gates died in 1994. In 1996, Mr. Gates married Mimi Gardner, the former director of the Seattle Art Museum.

Mr. Gates co-founded what became Preston, Gates & Ellis, a leading Seattle law firm, in 1964, and was a partner until 1998. (The firm is now called K&L Gates.) He was president of the Seattle/King County Bar Association and the Washington State Bar Association and a director of the Greater Seattle Chamber of Commerce, the King County United Way and Planned Parenthood. In 1995, he founded the Technology Alliance to expand jobs in the field. He also served 15 years as a regent of the University of Washington.

But his principal focus after 1994 was the Gates foundation. During his tenure, he directed grants that created children’s vaccines; provided sanitation and clean water to impoverished rural areas in developing countries; distributed bed netting to reduce mosquito-borne malaria; supported the education of girls; and promoted contraceptive use, nutritional supplements and single-use syringes.

In an age of income inequality, Mr. Gates Sr. argued that the purpose of wealth was not to pass it on to loved ones. With Mr. Buffett and the financier George Soros, he opposed a repeal of the federal estate tax in 2001. In 2003 he published “Wealth and Our Commonwealth: Why America Should Tax Accumulated Fortunes” (written with Chuck Collins). And he campaigned unsuccessfully in 2010 for a Washington State income tax on individuals earning $200,000 and couples earning $400,000.

Unlike most philanthropies, the Gates foundation’s bylaws mandate the disposal of all its assets within 20 years of the death of Bill or Melinda Gates, whichever comes later. By 2019, the foundation had given away about $50 billion but still had a $47 billion endowment. Forbes magazine said Bill Gates had $108.8 billion in January 2020, exceeded only by the fortune of the Amazon founder, Jeff Bezos ($115.6 billion) and that of Bernard Arnault, the LVMH luxury goods titan ($117 billion).

In his book “Showing Up for Life: Thoughts on the Gifts of a Lifetime” (2009), Mr. Gates Sr. wrote: “Those who claim that the wealth they have accumulated is theirs to pass on without returning anything back to the American system show a shocking lack of appreciation for all that the system and public monies did to help them create wealth.”

“It Was A Sad Moment For Me” – Erica Writes About Her Disqualification.