BREAKING: Army Embarks On “Operation Show Of Force” In Akwa… 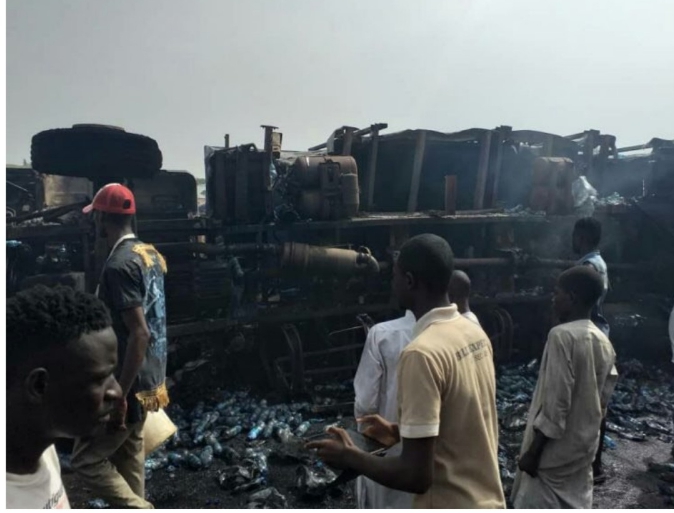 SAHARANEWS – Report reaching our newsroom has it that atleast two people lost their lives as tanker laden with petroleum exploded and went up in flames.

SaharaNews gathered that the ugly incident occurred on Thursday in Ibadan, the Oyo State capital.

The tanker, fully loaded with Premium Motor Spirit, also known as petroleum lost control and crashed into a building.

The PMS the tanker was carrying started splitting which made some people in the area to scoop the fuel.eyewitness accounts.

It was gathered that the tanker exploded in the process.

The tanker, it was learnt exploded into flames at Ile Marun, area of Iwo road along Lagos/Ibadan expressway.

Another source at the scene revealed that the incident occurred due to break failure.

He said that it was the flame that attracted people in the area to the scene.

The eyewitness added that two people lost their lives in the incident.

Adeleke, while confirming that two people lost their lives in the incident, added that two cars were also burnt.

Adeleke said, “Yes, we were called this afternoon around 2.pm of a tanker that exploded around Onipepeye, along the Lagos/ Ibadan expressway today.

“Our men got there and put the situation under control.

“A tanker carrying petroleum fell down, fuel was splitting from the tanker.

“As a result, some people in the area in the process started to scoop the petroleum from the tanker.

“The tanker later explodeed and catches fire in the process.

“In the process, two people lost their lives and two cars were also burnt in the process.”

JUST IN: Atiku Sends A Powerful Message To Nigerians, Tells Them What To Do This time