JUST IN: Referendum Made Atiku A Nigerian Citizen –…

JUST IN: I will restructure Nigeria in a way that Biafra… 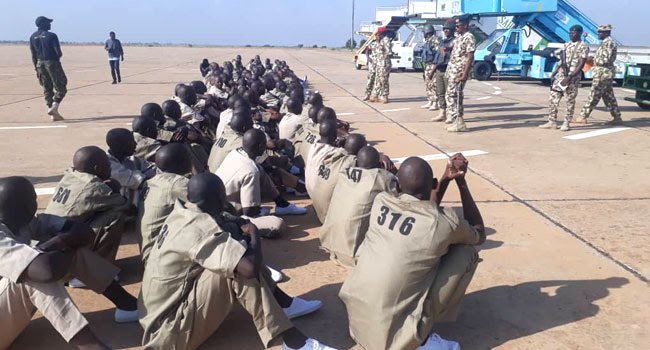 SAHARANEWS – The 601 repentant terrorists who are being reintegrated into their communities have been given N20,000 stipends and some basic equipment to practise their respective vocations.

The Borno State Commissioner for Information, Babakura Jatau, said this during a chat with newsmen.

Jatau said the funds and the starter packs were given to the repentant terrorists by the North East Development Commission and the International Organisation for Migration.

He denied reports that the state government was giving each of the beneficiaries N100,000.

The commissioner said only about 10 per cent of the 601 repentant terrorists were actually Boko Haram members while the rest were those who were abducted and became accomplices.

The commissioner said, “They are 601 of them and the question of government giving them N100,000 each does not arise. What happened is that the North East Development Commission gave them starter packs. Some of them trained as barbers so they were given clippers and generators and then given N20,000 cash and their shops will be paid for.

“What the government will do is that they will be brought to Borno State from Gombe and they will be housed in two orientation camps where there are facilities for training and for them to practise whatever they were taught in Gombe.

The Defence Headquarters had on Saturday announced the reintegration of 601 ex-Boko Haram terrorists, including 14 foreign nationals from Cameroon, Chad and Niger into the society through their respective national and state authorities.

The Coordinator of Operation Safe Corridor, Major General Bamidele Shafa, disclosed this on Saturday at the DRR Camp in Mallam Sidi, Gombe State.

However, a former Director of the Department of State Services, Mike Ejiofor, told Sunday PUNCH that the decision to re-integrate the repentant Boko Haram members was ill-timed.

Ejiofor said Nigeria’s ability to manage and utilise data was not sufficient.

He stated, “It is an unfortunate decision as far as I am concerned and it is not welcome at all. If you are taking their DNA, that is not enough because do we even have data? It will increase crime rate and banditry in that area. The government should have thought this through and not reintegrate them into society just like that. It is not a welcome development.”