Omokri mocks Buhari for promising to end security crisis in… 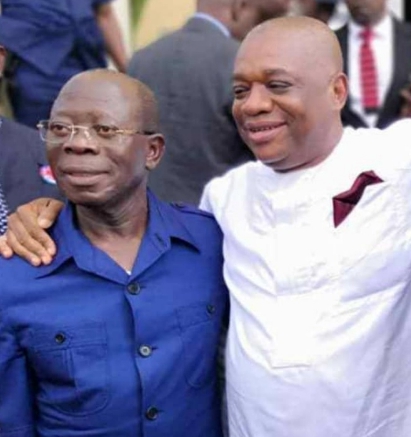 SAHARANEWS – The chances of Femi Gbajabiamila becoming the next speaker of the House of Representatives has been ruled out.

This is because the All Progressives Congress, APC, has made a U-turn and excluded the Northwest and Southwest from the zoning of the Senate President and House Speaker as well as their deputies.

Oshiomhole, APC National Chairman
Speaking with SaharaNews correspondent and other journalists in Abuja on Tuesday, the party’s Deputy National Publicity Secretary, Yekini Nabena, said that all the geopolitical zones must be fairly represented both in the executive and legislative arms.

He said with President Muhammadu Buhari and Vice President Yemi Osinbajo coming from the North-West and South-West respectively, “the party’s leadership should ensure that the zoning arrangement for the Senate President, Deputy Senate President, Speaker and Deputy Speaker of the House of Representatives in the incoming 9th National Assembly reflects the remaining four geopolitical regions of the country.”

The APC Spokesperson warned that if the party does not get it right now, 2023 elections might turn out to be a free for all, with its attendant electoral consequences.

“The APC has elected National Assembly members from all geopolitical zones of the country.

“Hence, the party’s leadership and indeed the presidency must make deliberate efforts to provide a fair and justifiable zoning arrangement for the 9th National Assembly leadership.

“The zoning arrangement must also respect the fact that the North-west and South-west have already produced the President and Vice President respectively.

“So, for equity and adherence to the principle of federal character which is a constitutional requirement, the positions of Senate President, Deputy Senate President, Speaker and Deputy Speaker of the House of Representatives in the incoming 9th National Assembly must be occupied by APC members from the remaining four geopolitical zones of the country,” he said.

According to the Bayelsa-born APC Chieftain, “the Party’s National Working Committee, NWC, under the leadership of the party National Chairman, Comrade Adams Oshiomhole, has already zoned the Senate Presidency to the North-east.

“The South-west already has a slot filled by the Vice President. In any case, the South-west does not necessarily translate to Lagos or Ogun state. This is a sentiment widely shared by our members from the zone.

“As I earlier stated, the party’s leadership must take deliberate steps to provide a fair and justifiable zoning arrangement for the incoming 9th National Assembly leadership.

“Our actions and inactions will have serious implications on party unity and positively or negatively affect our standing ahead of 2023.”