BREAKING: Nigerian Man Who Couldn’t Feed Sets Self On… 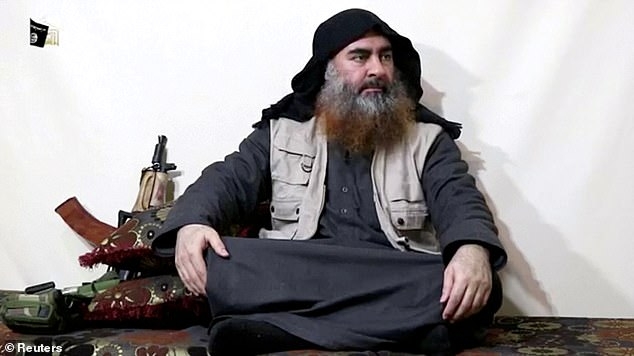 SAHARANEWS – The leader of the Islamic State militant network is believed to be dead after being targeted by a US military raid in north-west Syria, Dailymail reports

Abu Bakr al-Baghdadi, the leader of the so-called caliphate, is thought to have detonated his own suicide vest during the targeted raid on his lair in Syria’s Idlib province.

A US official said confirmation that the ISIS chief was in the explosion is pending, while US President Donald Trump said there would be a major announcement, tweeting on Saturday night that ‘Something very big has just happened!’

He is set to make a ‘major statement’ at the White House at 1 pm on Sunday (GMT).

The strike came amid concerns that a recent American pullback from northeastern Syria could infuse new strength into the militant group, which had lost vast stretches of territory it had once controlled.

The Syrian Observatory for Human Rights, a Syria war monitor, reported an attack carried out by a squadron of eight helicopters accompanied by a warplane belonging to the international coalition on positions of the Hurras al-Deen (al-Qaida affiliated group – Guardians of the Jihad) and where ISIS  operatives are believed to be hiding in the Barisha area north of Idlib city, after midnight on Saturday-Sunday.

The Syrian Observatory documented the death of nine people as a result of the coalition helicopter attack, adding that the death toll is likely to rise due to the presence of a large number of wounded.

Al-Baghdadi led ISIS for the last five years, presiding over its ascendancy as it cultivated a reputation for beheadings and attracted hundreds of thousands of followers to a sprawling and self-styled caliphate in Iraq and Syria.

He remained among the few ISIS commanders still at large despite multiple claims in recent years about his death and even as his so-called caliphate dramatically shrank, with many supporters who joined the cause either imprisoned or jailed.

His exhortations were instrumental in inspiring terrorist attacks in the heart of Europe and in the United States.

Shifting away from the airline hijackings and other mass-casualty attacks that came to define al-Qaida, al-Baghdadi and other ISIS leaders supported smaller-scale acts of violence that would be harder for law enforcement to prepare for and prevent.

They encouraged jihadists who could not travel to the caliphate to kill where they were, with whatever weapon they had at their disposal.

In the US, multiple extremists have pledged their allegiance to al-Baghdadi on social media, including a woman who along with her husband committed a 2015 massacre at a holiday party in San Bernardino, California.

With a £19.5 million ($25m) bounty on his head, al-Baghdadi had been far less visible in recent years, releasing only sporadic audio recordings, including one just last month in which he called on members of the extremist group to do all they could to free ISIS detainees and women held in jails and camps.

The purported audio was his first public statement since last April, when he appeared in a video for the first time in five years.

In 2014, he was a black-robed figure delivering a sermon from the pulpit of Mosul’s Great Mosque of al-Nuri, his only known public appearance.

He urged Muslims around the world to swear allegiance to the caliphate and obey him as its leader.

‘It is a burden to accept this responsibility to be in charge of you,’ he said in the video.

The reported death of such a high-value US target comes amid a difficult political backdrop fro Trump, who has been frustrated heavy media focus on the Democratic-led impeachment inquiry, which he calls an illegitimate witch hunt.

He has also faced withering criticism from both Republicans and Democrats alike for his U.S. troop withdrawal from northeastern Syria, which permitted Turkey to attack America’s Kurdish allies.

Trump was expected to make the statement in the White House Diplomatic Reception Room, which he has used to make a number of major announcements.

Just last week he used the same room to announce that a ceasefire between Turkey and the Kurds had taken hold.