“From close interactions with leadership of the Labour… 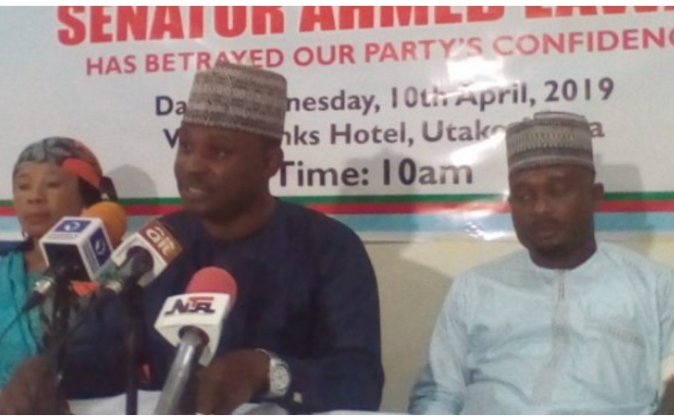 SAHARANEWS – A registered group of the ruling All Progressives Congress (APC) on the platform of APC Youth Solidarity Network, has appealed to the leadership of the party, President Muhammadu Buhari and the National Leader, Bola Hammed Tinubu to withdraw support for a particular senator (Ahmed Lawan) and throw the position of Senate Presidency open to all members.

The group also accused the preferred candidate of the APC, Sen. Ahmed Lawan of conceding the office of the Deputy Senate President to the opposition People Democratic Party (PDP) in some of the midnight meeting he has been allegedly holding with the governors of the PDP.

Addressing a Press conference tagged “Ahmed Lawan has betrayed the confidence of the APC” on Wednesday in Abuja, spokesman of the group said the party must stop any kind of agreement Sen. Lawan might have had with the PDP governors now so as to avoid the repeat of the outgoing 8th Assembly.

“Today, one of the contenders for the office of the Senate President, an APC member, Senator Ahmed Lawan has commenced visitation to the PDP governors mostly in the night to seal deals with the opposition party in order to gain their favour. The meeting is to persuade PDP senators to support his candidacy.

“We make bold to say that while most APC young leaders faulted our National Chairman’s statement of endorsing Ahmed Lawan as a preferred candidate for the Senate President. We stood with the Chairman and even trying to convince other members of our great party but Sen. Lawan has clearly betray the party and Mr. President for his alliance with the PDP in a desperate move to lead Nation as President of the Senate.”

While calling on President Buhari, Tinubu and Adams Oshiomohle to quickly withdrawn their support for Sen. Lawan, the group said: “What we are asking the leadership of our party to do is to throw the office of the Senate President open. We condemn in totality the endorsement of Ahmed Lawal as tbe sole candidate.

“We must stop any agreement Senator Lawan has made with the PDP and install a complete APC Senate President loyal in the morning and the night, and not APC in the day and PDP at night.”

JUST IN: Atiku Reacts To Fresh Posters in Abuja – Photos