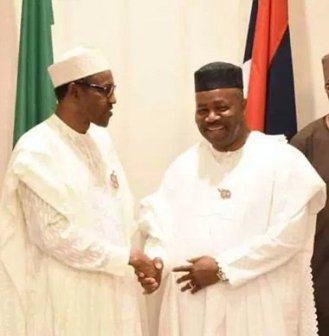 SAHARANEWS – The chieftain of All Progressive Congress, APC, Senator Godswill Akpabio has landed in trouble as letter which allegedly emanated from him got leaked.

SaharaNews gathered that in the letter, Akpabio sought presidency support in rigging elections in Akwa Ibom state and also planning to build cattle ranch in Ikono/Ini, Mosque in Uyo

The letter addressed to the Chief of Staff to the President, sought the presidency to mandate INEC chairman in the State to release result booklets and other election materials to him (Akpabio) two days to the election.

Akpabio in the letter sought to be allowed access to uncollected Permanent Voter Cards (PVCs) in areas where the PDP has strong presence.

The letter also sought the presidency to cause INEC to create additional 382 polling stations to ease the use of the uncollected PVCs, and the cancellation of election results in places where the PDP has advantage.

Part of the letter says, winning the governorship election was the only way the donation of land for a ranch and construction of a mosque in Uyo agreed with the President would be actualised, adding that about 79 hectares of land have been acquired in Ikono/Ini for the ranch project.

See copy of the letter below

CALL OFF ELECTION BOYCOTT: We Can’t Sign Any Document With Zoo Without Participation of Int. Community – IPOB Leader