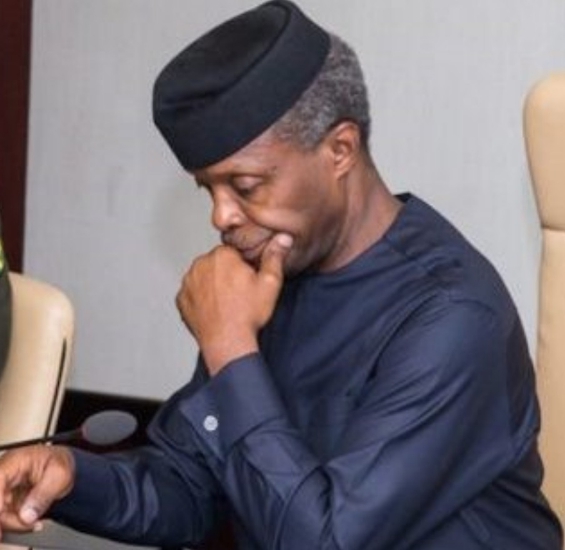 SAHARANEWS – The travails of Vice President, Prof Yemi Osinbajo over the alleged N33bn in National Emergency Management Agency (NEMA) is set to be compounded as plots to begin impeachment process against him in the Senate are brewing.

.
Sources revealed that some senators, goaded by some forces in the villa, are gearing to dust up the report of the House of Representatives Committee which investigated the illicit financial activities within NEMA, amounting to N33bn when Osinbajo acted as President in 2017. Coincidentally Osinbajo is also chairman of the governing board of NEMA.The Senate is expected to resume on Tuesday September 24.

Indications that the presidency was displeased with Osinbajo emerged when a memo by the President mandating him to henceforth take directives from the President in the management of agencies and parastatals he was constitutionally empowered to oversee, a move many interpreted as whittling the influence of the vice president.

This action on the Vice president comes at a time the President formed the Economic Advisory Council with a mandate to report directly to him which in effect disbands the Economic Management Team, hitherto under the supervision of Osinbajo.
Osinbajo chairs the governing boards of the National Emergency Management Agency (NEMA), the National Boundary Commission (NBC) and the Border Communities Development Agency (BCDA).

He is also the chairman of the board of directors of the Niger Delta Power Holding Company (NDPHC), a limited liability company owned by the three tiers of government.

The vice-president also chairs the National Economic Council (NEC), a constitutional body made up of state governors and key federal government officials, as well as the National Council on Privatisation (NCP).

However, the source revealed that some senators have been prepped to kick start the process of Osinbajo’s sack on the grounds of the House of Representatives report on the sleaze in the management of intervention fund during Osinbajo’s tenure acting president.

The House of Representatives had in 2018 investigated the illicit activities in the administration of intervention funds by the National Emergency Management Agency (NEMA) under the supervision of the Osinbajo.

The investigation was sequel to House plenary resolution on February 15, 2018 which mandated it’s Committee on Emergency and Disaster Preparedness to investigate the alleged “Violation of Public Trust in National Emergency Management Agency (NEMA)”

The Committee adopted the following terms of reference to determine the propriety or otherwise of the transactions undertaken and expenditures incurred in the following areas of concern by management of NEMA.

“(i) The release of N5,865,671,389.26 and N3,153,000,000.00 as emergency intervention of Food Security to support the population affected by insurgency in the North-East in June 2017 and other releases for the North-East intervention;
“(ii) The 6,779 metric tons of rice donated by Chinese government to the internally displaced persons in the North-East;
“(iii) Payment of about N800 Million Demurrage on the donated Rice by the Chinese government;
“(iiii) Over 10 Billion Naira being statutory 20% Ecological Funds released between January 2017 to February 2018 to NEMA;
“(v) The Federal Government of Nigeria Flood Intervention in the sum of N1,600,000,000.00 to 16 States in July 2017;
“(vi) The over N1.6 Billion released to NEMA for Evacuation of Nigerians stranded in Libya in 2017; and
“(vii) Other ancillary issues,” the report made available to Point blank news revealed.

According to the report, the House Committee conducted the investigation over a period of three months in 11 Public Sitting with various stakeholders.

The report revealed damning illict transactions that happened in the emergency agency with intervention fund.

Finding on the donation of 6,779 Metric tons of rice by the Chinese government for IDPs in the North east, the House Committee said,
“– That the Chinese government donated and shipped a total of 6,779 metric tons of rice, that is 271 trucks and approximately 162,696 bags of rice into the country’s seaport in June 2017 meant for distribution to IDPs in the North-East as food assistance.
“– That the government Agencies namely – Ministry of Budget and National Planning, Ministry of Agriculture, Ministry of Finance and NEMA were charged with different responsibilities of receiving, clearing, storage, transportation and distribution of the consignments to the IDP’s in the North East.
“– That more than one year after the goods were donated, there is no evidence that the 6 States of the North East, who are the beneficiaries have received the items.
“– Evaluation of the correspondences by the Chinese government on the free donation of the items and responses by the Federal government Agencies confirmed that there was adequate information on the donation, as an Memorandum of Understanding (MOU) was entered into by all the parties indicating the role to be played by each Agency. But the rice could not be evacuated over long period of time at the seaport despite written letters by Chinese Government to Ministry of Budget and National Planning after an import waiver had been obtained from Ministry of Finance, informing the Nigerian authorities of the consequences of the delay in clearing the items.
“– The Federal Government paid about N800 Million as demurrage to APM terminal and Maersk Line for the consignment due to delay arising from inability and negligence on part of NEMA, Ministry of Agriculture, Ministry of Finance and Ministry of Budget and National Planning to secure the items as at when due.
“– APM Terminal provided invoices on the demurrage showing payment by Ministry of Agriculture but NEMA testified it made the payment. NEMA could not however, provide before the Committee evidence of payment to APM terminal but the payment reflected in their account book.
“– Ministry of Budget and National Planning was to provide the funding for the clearing, transportation of the rice, handling and logistic charges as agreed in the Memorandum of Understanding signed by the Government Agencies.
“– Ministry of Agriculture was responsible for providing silos for the storage of the rice.
“– The Ministry of Agriculture confirmed to the Committee that no single bag of the consignments was delivered and received from NEMA as at the time of this report.
“– Global View Logistics Ltd and Baltic Air and Maritime Services Ltd engaged to clear the rice were not registered contractors with NEMA, the Companies were equally not registered with ITF, NSITF, and PENCOM, as required by existing law, practice and Regulations.
“– National Emergency Management Agency (NEMA) was saddled with the responsibility of delivering the consignments to different designated silos and to distribute all the 6779 metric tons of the Chinese rice to the IDPs within the 6 States in the North-East in the following proportion:
S/No States Percentage and Tons Equivalence in Trucks
1 Borno 35% = 2,372.7 M/Tons 79.09 Trucks
2 Yobe 20% = 1355.8 M/Tons 45.1 Trucks
3 Adamawa 15% = 1016.85 M/Tons 33.89 Trucks
4 Gombe 10% = 677.9 M/Tons 22.5 Trucks
5 Bauchi 5% = 339 M/Tons 11.3 Trucks
6 Taraba 5% = 399 M/Tons 11.3 Trucks
7 Kwali FCT 10% = 677.9 M/Tons 22.5 Trucks
TOTAL 225.5 Trucks

“Ministry of Finance provided Certificate for Import tax waiver with tax deduction on the consignments donated to Nigeria by Chinese government
“The 5 State governments in the North-East except Borno State who did not appear before Committee, denied receiving any single bag of rice from the consignment purported to have been delivered and distributed to the IDPs by NEMA.
“– Due to the testimony of the Director of Finance and Accounts (DFA) and some staff of NEMA on payment of demurrage which the management was not comfortable with, NEMA management hurriedly convened a Governing Council meeting of NEMA for the first time in 3 years where it took a decision to suspend the Director of Finance and 5 other staff of the Agency without due process and in flagrant violation of the principle of fair hearing as guaranteed under Section 36 of the 1999 Constitution as amended.
“– The suspension took place on 2nd April, 2018 which was the date of the inauguration of the Council Members by the Vice President. This was done within the period of investigation by the Committee, and intended to jeopardise and obstruct the work of the Committee.”

B. RECEIPT AND UTILIZATION OF N1.6BILLION FOR FLOOD VICTIMS IN 16 STATES FINDINGS:
– NEMA confirmed receiving the sum of N1.6 Billion released to it by the Federal Government as Intervention Fund to purchase food items and other relief materials for distribution to all the 16 States which was affected by the flood disaster in June 2017. The States are: Lagos, Oyo, Edo, Kwara, Ebonyi, Niger, Ekiti, Kebbi, Akwa Ibom, Plateau, Sokoto, Bayelsa, Enugu, Ondo, Abia State and FCT
– The ratio of distribution of the fund for each State is N100,000,000.00.
– The Committee further confirmed that 11 of the States received relief items worth less than N50,000,000.00 each while 5 States received items worth N70,000,000.00 each from NEMA and only received the items in March 2018 when the investigative hearing commenced.
– The relief materials released was an afterthought and not intended to salvage the situation as the disbursement happened 9 months after the flood disaster. Thereby defeating the emergency purpose for which it was meant.
– NEMA could only account for the disbursement of N900 Million to the Sixteen States. The balance of N700 Million could not be accounted for.