JUST IN: EU Reacts To Sowore’s Arrest And Detention,…

All you need to know about visiting the Chad Basin National…

BREAKING: At Least 10 Burnt Beyond Recognition In Gombe As Petrol Tanker Collides With Truck 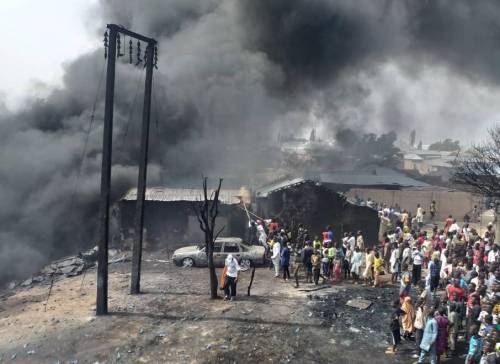 At least 10 people have been killed, with several cars burnt, after a petroleum tanker exploded at Bomala Bridge axis of Gombe, capital of Gombe, on Saturday afternoon.

He said more than 10 charred bodies were evacuated from the scene by personnel of the Nigerian Red Cross Society.

As of the time of filing in the report, officials of the Gombe State Fire Service were still trying to put out the fire.

ALSO READ:  WTO Confirms Okonjo-Iweala As One Of The Two Finalists For DG Job

JUST IN: Atiku Reacts To APC’s Claim That He Is Not A Nigerian, Says He Will Not Dignify Them With An Answer

JUST IN: “Give Me Grazing Routes For Fulani And Herdsmen crises will STOP” – Buhari Tells Nigerians