HERDSMEN ATTACKS: Fulani Herdsmen Machetes A Man In His Farm… 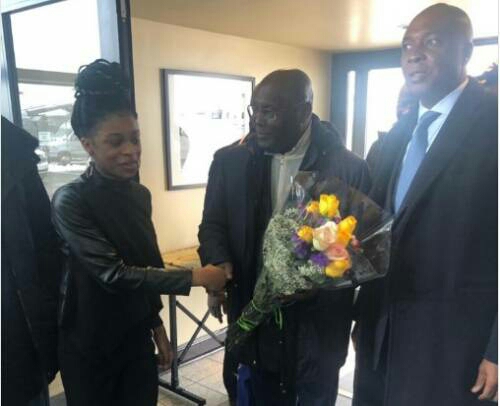 Atiku Abubakar, presidential candidate of the Peoples Democratic Party (PDP), has arrived in the United States of America.

SaharaReporters had reported earlier in the day that Atiku was scheduled to travel to the United States “any moment from now”, possibly before Saturday’s presidential debate organised by the Broadcasting Organisations of Nigeria (BON) and the Nigeria Elections Debate Group (NEDG).

He hadn’t stepped on American soil for well over decade dating back to his vice presidency, allegedly due to the belief he would be arrested for allegations of corruption, including one by US congressman Williams Jefferson that part of the $100,000 cash found in his refrigerator was intended as bribe for Atiku for his role in helping American firm iGate secure a contract to expand broadband in Nigeria.

However, in October, Atiku Abubakar, Gbenga Daniel, Director-General of the Atiku Presidential Campaign Orgsanisation (APCO), said his principal had received “signals from American officials” to apply for visa and it would be granted.119 Comments 2 Months Ago

Despite the protestations of Lai Mohammed, Minister of Information, that the United States should exercise caution in granting visa to Atiku, it was reported in December that the visa had indeed been granted.

“Atiku will travel to the US any moment from now, and it could even be on Thursday,” a source very familiar with the development had told SaharaReporters late Wednesday. “He is still afraid the coast is not completely clear, and he could be harassed or arrested once he steps in. But I can authoritatively confirm that he will indeed be going to the US very, very, very soon.”