All will be well very soon in Nigeria — Kumuyi tells…

Biafra: Man Visits Nnamdi Kanu In Israel, Kneels Before Him…

BREAKING: Nnamdi Kanu Reacts To Court Order For His… 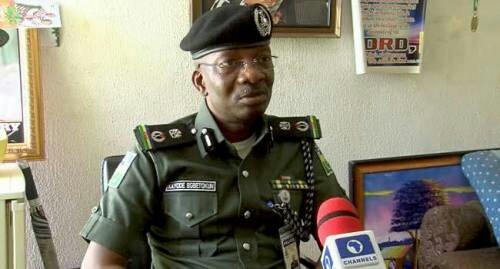 Edgal was redeployed to the force headquarters in Abuja on Sunday with an instruction to resume at his new post immediately.

The Coalition of Ethnic Nationalities for the Atiku Agenda (CENTAA), one of Atiku Abubakar’s campaign groups, has kicked against the replacement of Imohimi Edgal, the former Lagos Police Commissioner, with Kayode Egbetokun, former Chief Security Officer of Bola Tinubu.

Edgal was redeployed to the force headquarters in Abuja on Sunday with an instruction to resume at his new post immediately.

A statement by the group on Monday noted that the change in guard of the Lagos State Police Command was insensitive.

Adeoye Jolaosho, president of the group, said the appointment of Egbetokun is aimed at “rigging the forthcoming elections in favour of the ruling party”.

His words: “While not taking anything away from the new commissioner, we must, however, express our opposition to this posting because the officer involved was at one time the CSO to a chieftain of the APC, former Governor Bola Tinubu, between 1999 and 2007.

ALSO READ:  Why We Are Not For Oduduwa Republic — Late Frederick Fasehun's OPC Faction

“While we concede that the top Police hierarchy has the prerogative to deploy and assign portfolios to its personnel as it deems fit, we, however, believe that such a power must and should be exercised with caution in a manner that would give confidence to all segments of the society.”

CENTAA maintained that Imohimi was carrying out his duties well and there was no basis for his redeployment.