BREAKING: Many Feared Dead As Boeing Plane Crashes Into… 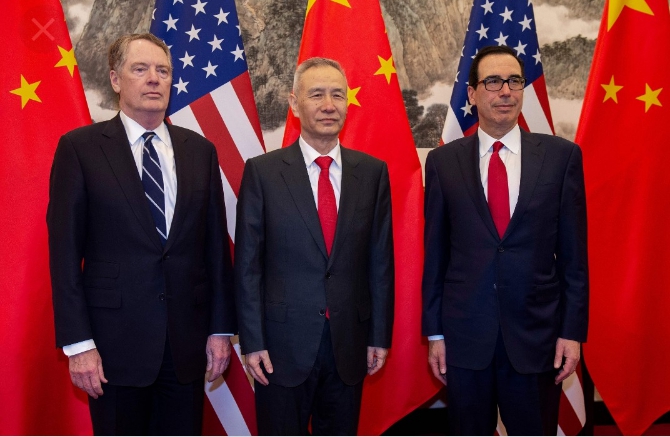 SAHARANEWS – China is fully prepared to defend its interests in its trade war with the U.S., but hopes the U.S. can resolve problems through dialogue instead of unilateral steps, the Chinese commerce ministry said on Thursday. The comments came as a Chinese delegation led by Vice Premier Liu He was set to hold talks in Washington on Thursday and Friday.

The meeting was aimed at salvaging a deal that appeared to be unraveling after U.S. officials accused China of backtracking on earlier commitments and President Donald Trump threatened to hike tariffs on Chinese goods on Friday. Speaking in Beijing,

the commerce ministry’s spokesman, Gao Feng, said China had the determination and capacity to defend its interests, but hopes the U.S. can meet it halfway. ”China’s attitude has been consistent, and China will not succumb to any pressure,” Gao said.

”China has made preparations to respond to all kinds of possible outcomes.” He did not elaborate. The U.S. Trade Representative’s office said tariffs on 200 billion dollars of Chinese goods would rise to 25 per cent from 10 per cent at 12:01 a.m. (0401 GMT) on Friday.

These include chemicals, building materials, furniture and some consumer electronics. The U.S. tariff action would come in the middle of the meetings in Washington.

”China has made preparations to respond to all kinds of possible outcomes.” He did not elaborate. The U.S. Trade Representative’s office said tariffs on 200 billion dollars of Chinese goods would rise to 25 per cent from 10 per cent at 12:01 a.m. (0401 GMT) on Friday.

These include chemicals, building materials, furniture and some consumer electronics. The U.S. tariff action would come in the middle of the meetings in Washington.

Trump also threatened on Sunday to levy tariffs on an additional 325 billion dollars of China’s goods, on top of the 250 billion dollars of its products already hit by import taxes. Until May 4, when a deep rift opened up over the language of the proposed accord, there had been strong expectations that the two sides would reach a deal to de-escalate a tariff war that broke out in 2018.

Reaching a deal required effort from both sides, Gao said, adding that China had demonstrated its sincerity by sending its negotiators to Washington in spite of the U.S. threat to raise tariffs. Trade negotiations are a long process, and it is normal to have disagreements, Gao said, adding that China is willing to continue talks with the U.S. to resolve their trade dispute.

While the U.S. wants to reduce the scale of its trade deficit with China, it is also seeking better protection for American intellectual property and more market access in China for U.S. companies. Gao described accusations about Chinese firms stealing tech secrets as unreasonable and said they were not based on facts.

ALSO READ:  Nothing has changed on the persecution Christians faces in Nigeria — CAN tells US

Based on 2018 U.S. Census Bureau trade data, China would only have about 10 billion dollars in U.S. imports left to levy in retaliation for any future U.S. tariffs, including crude oil and large aircraft.

Chinese state media on Thursday published and aired reports quoting U.S.-based organisations and individuals critical of Trump’s decision to raise tariffs, though downplaying the impact of higher U.S. tariffs on the Chinese economy. ”China is well-prepared for an escalation in trade tensions. A variety of plans are in place, such as countermeasures for any tariff rise, and favorable policies to minimise losses for Chinese enterprises,” the Global Times, said in an editorial.

”Mentally and materially, China is much better prepared than its U.S. counterpart.” China’s blue-chip CSI300 index has slumped about seven per cent so far this month on the renewed trade tensions. The Chinese yuan has also retreated to a four-month low against the dollar, crossing the psychologically key 6.80 level.

JUST IN: Buhari And APC Taking Nigerians for Granted – OBJ

BREAKING: Reporter asks KariLake if she will be Trump’s VP, gets absolutely BLOWN…