IRAN VS US: (VIDEO) 30 US Soldiers Killed In Iraq Missile… 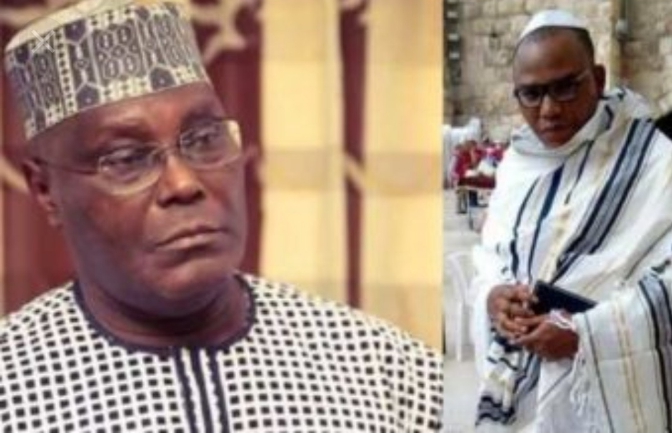 SAHARANEWS – The leader of the proscribed Indigenous People of Biafra, IPOB, Nnamdi Kanu, who is on the search list of the Nigerian government, has decided to offer a legal advice to the candidate of the Peoples Democratic Party, PDP, Alhaji Atiku Abubakar.

Kanu who spoke on a live broadcast on Sunday, told Atiku to ask President Muhammadu Buhari, to go for a DNA test to prove his originality.
DNA test is a deoxyribonucleic acid that contains the genetic code and information of every single individual on earth.

His words, “I will offer free legal advice to Atiku live on air in the hope that they will use it because it is obvious Atiku won the election and APC are deploying all instruments of coercion at the disposal of the Nigerian state to deny him his mandate.

“Between Atiku and the man occupying Aso Rock, only Atiku is a Nigerian, the other is Sudanese. Atiku is not a Nigerian by birth but he is by choice, through referendum at the age of 15. But the other person is neither a Nigerian by birth nor by choice. Atiku should demand for Buhari’s DNA and if it turns out that the person in Aso rock is Buhari, I will drop my agitation immediate.

Recall that Buhari’s legal team had queried Atiku’s citizenship, and also told the election tribunal that Atiku is a Cameroonian and not Nigerian.

In view of the above, Kanu said, “the weak and porous argument Atiku’s defence team is making in response to this line of attack by APC, is to say that, ‘it is ludicrous to allege that a man who became Nigeria’s vice-president, who has lived, invested and paid tax in the country for years is not a citizen.

Speaking further he said, “This is a wholly unnecessary digression that failed to address the constitutional question of place of birth as key qualification for anybody seeking to become the president of Nigeria. That Atiku was the Vice President is not the issue at hand but rather his suitability as defined by the constitution of Nigeria.

Atiku And The Cameroon Journey
“However, APC putting up the argument in court is a “vindication that everything I say on Radio Biafra is the truth.

“It may appear outlandish and unbelievable at first, but eventually history always vindicate me. It is now over to Atiku’s team to unleash what they have against Jubril”, he continued.