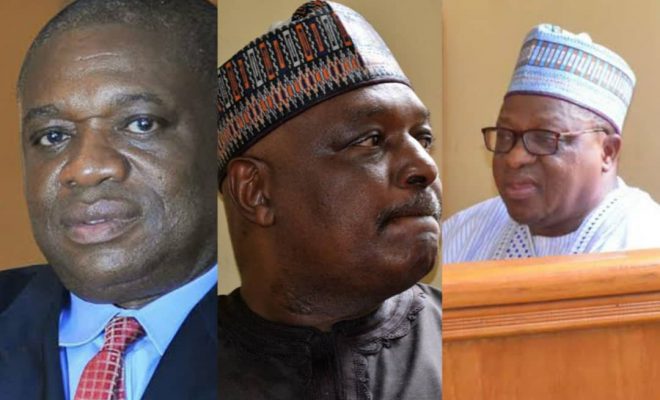 SAHARANEWS – The Federal Government of Nigeria has reportedly made moves to grant presidential pardon to Senate Chief Whip, Orji Uzor Kalu, among others.

Recall that UN High Commissioner for Human Rights, Michelle Bachelet, recently called on governments to take urgent steps by reducing prison populations, protect people in places of detention, and prevent uncontrollable outbreaks in other to prevent the spread of the deadly virus.

Rauf Aregbesola, Minister of Interior, on Thursday said the government was freeing 2,600 inmates in various prisons in a bid to curb the spread of coronavirus in the country.

According to Aregbesola, inmates including those from 60 years and above, especially those suffering from ill-health likely to end in death, serving at least three years and have less than six months to serve, persons with mental issues, and with options of fine not exceeding N50,000, are among those to be considered for the state pardon.

He went on to say that governors of the 36 states under whose jurisdiction most of the inmates were incarcerated will complete the exercise “in line with the federal principle.”

Recall that Orji Kalu’s travails began before he ended his tenure as governor of Abia State.

But many political observers and analysts have described his incarceration as unjust, and the handiwork of political enemies.

In reaction to the development, the North American Intelligence Agency kicked against Kalu’s incarceration, stating that his ordeal is “Politically motivated.”

The Intelligence Agency added that some political elites were trying to clip Kalu’s wings as he is one of the most influential voices in the South East who has been campaigning against the continued marginalization of Nigeria’s South East in the political equations of the country.

Also, a European Union commissioner in March 2020 described Kalu’s imprisonment as a plot by powerful political interests to frustrate him and Ndigbo ahead of the 2023 presidential race and also called for his immediate release.

In the same vein, Shettima Yerima, the National President, Arewa Youth Consultative Forum (AYCF) recently cautioned the North over the danger of abandoning Kalu to his fate, which he also described as politically motivated.

Nigeria is not the only country that is decongesting its prisons, as some states have already started to take action to decongest their prisons in a bid to curtail the spread of the coronavirus.

While in Ethiopia, over 4,0000 prisoners whose release dates were soon or had been given sentences of less than three years for minor crimes were pardoned, Iran released over 85,000 prisoners for its prisons.

Similarly, France’s Ministry of Justice also asked for short-term prison sentences to be delayed, reducing the number of new prison admissions from 200 a day to 30. And Ghana recently granted amnesty to over 800 prisoners, most of whom are first offenders.

These proposed measures are in line with existing international standards (such as the UN Nelson Mandela Rules, Bangkok Rules, Tokyo Rules) and reflected in the African Commission on Human and People’s Rights regional guidance (such as the Luanda Guidelines).

BREAKING: Bloodbath In Kaduna, State Govt. Vows Not To Negotiate With Bandits