Gov Umahi, After Meeting With Buhari, Talks Tough, Says He… 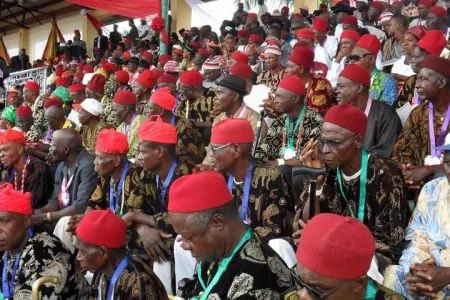 SAHARANEWS – The Ohanaeze Ndigbo has disowned its youths wing known as Ohanaeze Youth Council, and vowed to go all out for the actualisation of Nigerian president of Igbo extraction.

The group, which has consistently clamoured for the restructuring of the country expressed optimism that God would make it possible.

It described as laughable news report purporting that it had engaged former Head of State, General Yakubu Gowon, to lobby for the emergence of President of Igbo extraction in 2023.

It also said that if it was decreed by God that the Igbo stock would become president of Nigeria, the babbling of some amorphous groups masquerading as champions of the interest of Ndigbo would not count.

A group trading as Ohanaeze Youth Council (OYC), headed by one Okechukwu Isiguzoro, had recently alleged that it had appointed the former military leader to lobby for an Igbo to become president.

But the apex Igbo organisation in a statement by its National Publicity Secretary, Prince Uche Achi-Okpaga, yesterday, said that Isiguzoro and his sponsors were on their own.

Ohanaeze also described as deceitful the story that its leadership was planning to have an interface with some prominent political figures in the country towards achieving the same objective.

It, therefore, said that at no time were the aforementioned situations ever contemplated or was there any meeting at which they were tabled for consideration, let alone any action being taken or a press statement issued on that.

Ohanaeze stated: “The purported actions exist only in the imagination of the miscreants and enemies of the Igbo nation who are the purveyors of the unfortunate concoctions.

“Ohanaeze Ndigbo reiterates that there is no organisation as Ohanaeze Youth Council recognized by Ndigbo and that the misguided so-called leader of the group, Okechukwu Isiguzoro, is a warped, egocentric and power-hungry mind who obviously is living in an incontrovertible state of mental delusion.

“Ohanaeze Ndigbo regrets the unpatriotic acts of some Igbo politicians sponsoring these equally unpatriotic irredentists shamelessly flying the kite for them towards 2023.

“It states that if it is the wish of God that a president of Igbo stock shall emerge in 2023, it will not be midwifed by an inconsequential group whose only mission and preoccupation is personal aggrandizement and not the collective interest and aspiration of Ndigbo.”

COVID-19: (VIDEO) Things Will Never Get Normal Again Until Everybody Is Vaccinated – Bill Gates