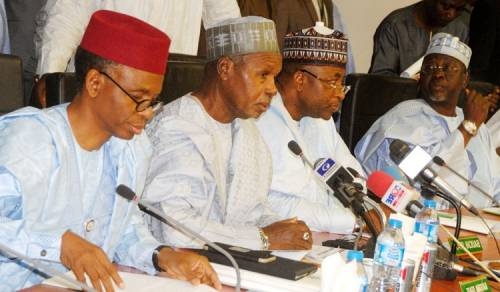 SAHARANEWS – The six governors in North-east Nigeria, a region devastated by the Boko Haram terrorists have called on the President Muhammadu Buhari regime and governments at all levels to engage in dialogue with the insurgents.

The governors believed that could allow those who might want to repent among the terrorists exit the insurgency easily.

In a communique issued at the end of one-day security summit convened by the inspector general of police held in Maiduguri on Tuesday.

The summit was attended by the six governors of the region, members of the national assembly, states assemblies, top military personnel, other security chiefs among others.

“That the summit notes with deep sense of appreciation, the roles and sacrifices of the Nigerian military, the Nigerian police and other security agencies involved in the fight against insurgency in the north-east zone and urges them to continue to do more in the service to their fatherland.

“That the summit calls on the federal government to urgently increase the funding of the Nigerian Armed Forces, the police and other security agencies involved in the fight against insurgency and other security challenges in the North-east zone.

“That there is need for the North East Development Commission to assist the governors of the North-east states, the police and other security agencies in providing more logistics and support for fighting insurgency and insecurity in the zone.

“That efforts need to be made by the federal government to dredge the canal of the Lake Chad so that the military and other security agencies can fight the Insurgents in a bid to end the insurgency, as military and security boats can only operate and fight where there is water,” the communique stated.

It added, “That military operations at the fringes of the Lake Chad which is currently harboring remnants of the Boko Haram insurgents need to be intensified and sustained.

“That governments at all levels are encouraged to engage in dialogue with the insurgents so that those who may want to repent and exit the insurgency can do so easily. “That the police as part of their constitutional mandate of protecting lives and property, should take proactive measures to check drug abuse, banditry, kidnapping, etc., using modern technologies and other gadgets.

“That the police should come up with modalities for informally linking up the operations of the civilian JTF with that of the police, under the community policing model, while the State Government should provide the necessary funding for such callaboration.”

In the communique, it was also agreed that all security agencies should to take the fight against terrorism to the corridors of the insurgents and do everything possible to end the insurgency in the North-east. In addition to that, that state governments should work with the security agencies to create access for farmers to go back to their farms so that economic activities can resume.

Continuing, it said, “That border security should be enhanced by deliberately engaging other neighbouring countries and states in matters of security.
“That deliberate efforts should be made by the state governments, the North East Development Commission and the police leadership to acquire modern crime fighting technology for the police and other security agencies to enable them deploy same in the fight against insurgency and other crimes.

“That deliberate efforts should also be made to encourage strong inteligence sharing between the traditional rulers, other stakeholders and the security agencies.

“That there is need for traditional rulers to be consulted in the recruitment of vigilantes and hunters who would assist the security agents to check insecurity situations in the North-east zone.”

Buhari Can Rule Nigeria From Any Part Of The World — Oshiomhole