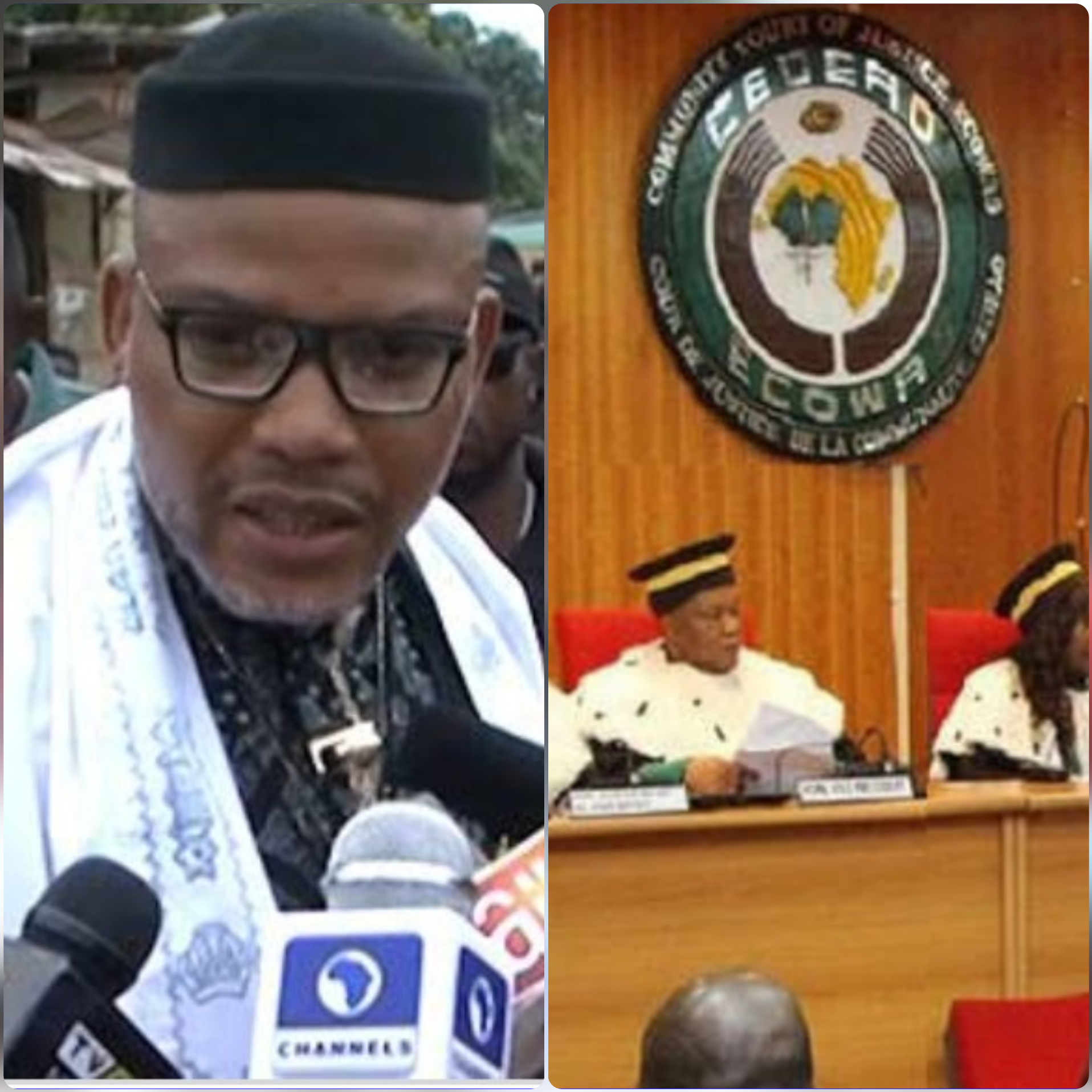 SAHARANEWS – The ECOWAS Court of Justice sitting in Abuja, on Wednesday, dismissed a suit the leader of the Indigenous People of Biafra, IPOB, Mr. Nnamdi Kanu, filed against the Federal Republic of Nigeria, alleging that he was tortured, assaulted and subjected to inhuman treatment by security operatives when he was arrested in 2015.

The regional court in a judgment read by Justice Dupe Atoki, held that the IPOB leader failed to prove his allegations against the Nigerian Government.

The ECOWAS Court stressed that it had no reason to conclude that his arrest and detention were unlawful and arbitrary as claimed.

Though the Court acknowledged that Kanu had the legal capacity to approach it to seek redress for any violation of his human rights, it, however, held that without a mandate, he lacked the legal personality to represent the IPOB before the Court.

ALSO READ:  "We Smell Blood And Are Closing In For The kill, Jubril-Buhari Is Encircled And Trapped By IPOB" - Nnamdi Kanu

The ECOWAS Court thereafter struck out names of the second and third defendants, the Attorney General of the Federation and Minister of Justice and the Director-General of the Department of State Service, DSS, from the suit on the premise that they were not signatories to the ECOWAS Revised Treaty, thus leaving only the Federal Republic of Nigeria as the sole defendant in the suit.

The IPOB leader had in the suit marked ECW/CCJ/APP/06/16, which he filed before the Court on March 3, 2016, through his lawyer, Mr. Ifeanyi Ejiofor, claimed that his rights to life, personal integrity, privacy, fair trial, freedom of movement, freedom of expression, personal liberty, freedom of association, private property, right to existence and right to self-determination were violated following his arrest and detention by Nigerian security agents.

Kanu also alleged that he was a victim of arbitrary arrest, detention, torture inhuman and degrading treatment while in detention, insisting that FG confiscated his personal belongings through its agent.

The IPOB leader demanded monetary compensation in the sum of $800 million US dollars.

However, Abdullahi Abubakar, a lawyer who represented the Nigerian Government, prayed the court to dismiss the suit which he contended lacked merit. FG argued that the country was obliged to enforce the rule of law as stipulated in its Constitution, Treaties, and Protocol that included defending the sovereignty of an undivided Nigeria.

Abubakar added that activities of IPOB were secessionist in nature as it instigated a separationist agenda among the people of the country’s South-East and South-South regions, using its Biafra Radio.

The lawyer to the Nigerian Government further averred that acts of the plaintiff were intended to garner support for a war against the defendant and carve out a geo-political area to be declared “The Republic of Biafra.”

Consequently, Abubakar stated that the defendant initiated an investigation into the allegations against the plaintiff that led to his arrest and discovery of illegal firearms and radio transmitters in his possession, items he said posed security risk to the country.

ALSO READ:  81 Ekiti Monarchs To Fayemi: We Won't Give Herdsmen Our Land For Ranching

The defendant also submitted that the plaintiff was investigated while in detention for offences of criminal conspiracy, managing and belonging to an illegal society, saying though he was granted bail, he was detained again on fresh charges that bordered on treasonable felony.

The defendant told the ECOWAS court that although the plaintiff and some members of the IPOB had severally threatened the peace of the nation with their demands, it gave no orders to its agencies to kill members of IPOB nor did any such killings occur.

The Federal Government stressed that it remained committed to upholding the rule of law, while recognizing and protecting the fundamental rights of its citizens and all groups, including the IPOB.

Other members of the ECOWAS Court panel that upheld FG’s position and dismissed Kanu’s suit on Wednesday were Justices Edward Amoako Asante and Keikura Bangura. (Vanguard)