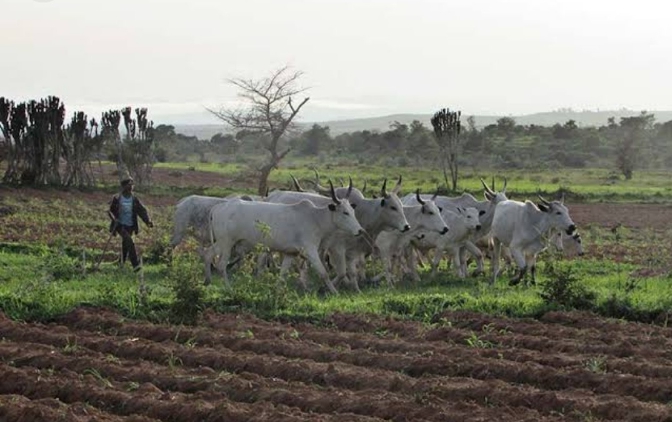 SAHARANEWS – The Police, on Monday evening, arraigned a 67-year-old Farmer, Samson Aku, in a Dutse Grade I Area Court, sitting in Bwari, Abuja, for allegedly killing 2 cows worth N360,000, belonging to a Fulani Herdsman.

Aku, who resides at Friendship Street, SCC Road in Bwari, is charged with causing mischief, by killing or maiming an animal.
He pleaded not guilty to the charge.
The Prosecution Counsel, Police Prosecutor, Mrs. Idowu Ojo, told the court that on June 6, that one Dauda Usman, a Fulani Herdsman, resident at Zuma Area of Bwari, reported the matter at the Bwari Police Station.

She explained that the Complainant reported that on June 5, while he was grazing in the bush behind Kogo II village, in the District, his cows mistakenly entered and ate part of the crops on the Defendant’s farm.

That the Defendant, Ojo, angrily used a matchet to maim 6 cows, killing 2 in the process, which she added were altogether valued at N360,000.

She said that during the investigation, the Defendant confessed to committing the crime. The Prosecutor also said that the offence contravened the provisions of Section 329 of the Penal Code.

The Presiding Officer, Mr. Suleiman Mohammed, admitted the Defendant to bail in the sum of N100,000, with one reasonable surety in like sum, who must be resident within the courts’ jurisdiction.

Mohammed adjourned the case until August 5, 2019 for hearing.