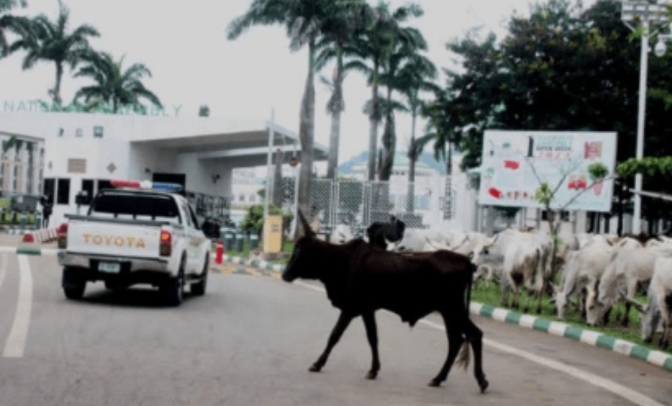 SAHARANEWS – The National Executive Committee (NEC) on the farmers-herders crisis has confirmed the suspension of the program by the President.

According to the committee, the suspension is owing to lack of consistency with the NEC and FG approved national livestock transformation plan which has programs of rehabilitation of displaced IDPs resulting from the crisis and development of ranching in any willing state.

The NEC says it is not compulsory and any state interested is required to draw up a development plan towards the implementation in line with the NEC program based on the challenges inherent it.

Those at the meeting are governors of Ebonyi, Dave Umahi, Plateau, Simon Lalong and Kebbi, Atiku Bagudu.

The Ruga initiative has for some time been generating heated debates in various quarters with some arguing that it is a scheme by the government of the day to reposition the Fulani tribe.

However, the presidency has defended the controversial Ruga settlements programme saying that the initiative is for the benefit of all.

According to a statement released by the Senior Special Assistant to the President, Garba Shehu, the presidency said the programme is not a scheme to reposition the Fulani people, adding that no state has been forced to partake of the initiative.

The presidency’s statement partially reads: “The Presidency wishes to draw attention to recent unhelpful comments regarding the plan to stop roaming of cattle herders with the attendant clashes with farmers.

“Ruga Settlement” that seeks to settle migrant pastoral families simply means rural settlement in which animal farmers, not just cattle herders, will be settled in an organized place with provision of necessary and adequate basic amenities such as schools, hospitals, road networks, vet clinics, markets and manufacturing entities that will process and add value to meats and animal products.

Beneficiaries will include all persons in animal husbandry, not only Fulani herders.”

BREAKING: No Going Back On Fulani Vigilante In The South East – Miyetti Allah