EndSARS: US Soldier Ready To Invade Nigeria To Save His Mom… 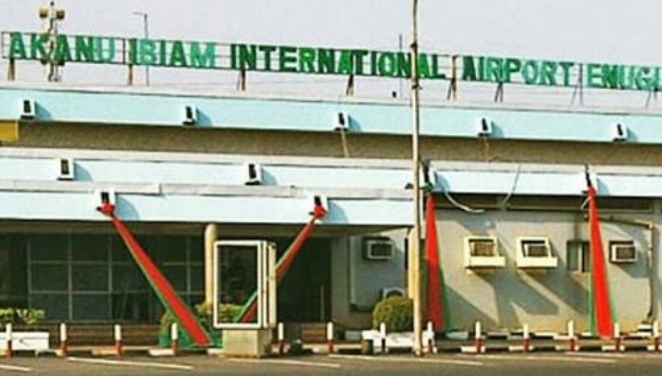 SAHARANEWS – The Federal Government said on Friday it would soon shut down the Akanu Ibiam International Airport in Enugu for security reasons.

Minister of State for Aviation, Senator Hadi Sirika disclosed this during the sixth aviation stakeholders’ forum which is still ongoing as at the time of filing this report.

He listed some of the reasons for the planned shutdown of the airport to include the bad condition of the runway, the landing aids, a market, a free trade zone, among others.

Sirika said the airport would be closed down until the state government removes all the encumbrances posing threat to safe flight operations at the airport.

The Minister also said the government had contracted Julius Berger to renovate the premier Murtala Muhammed International Airport (MMIA) at the project cost of N14bn.

Daily Trust reports that the government has carried out series of inspection to Enugu where a new terminal has been built. But the runway is being patched on a daily basis as the facility is said to have outlived its lifespan.

He said the proximity of the airport to the market which also has an abbatoir exposes the airport to regular bird strike, recalling that an Air Peace flight was recently hit by bird and the aircraft had to make an air return.

“As you approach Enugu, there is a market which has an abbatoir which attracts birds. At the end of the runway you have free trade zone. The state government kept promising they would remove all these challenges. Enugu maybe closed down soon”, he said.

“I can’t take the risk. That market must move two to three kilometers away. It will not harm the people. Ethiopian Airlines will stop going there. Also, the local airlines will stop. We have told the state government, ‘remove the trade zone, remove the market, the state radio mast that is directly on approach”.

On the Rehabilitation of the Lagos International Airport, he said, “The Lagos airport was built to handle N200,000 passengers but today Lagos airport is handling eight million people. So it must collapse. Julius Berger will help give it the new look it requires.

“The airport generates most of the income, so it is only right we give it facelift it requires,” Sirika added.

He said the new Lagos airport terminal will be completed before the end of the year, saying the airport would be shut in a way it would have little or no impact on flight operations.

He disclosed that out of 157 aviation projects the administration initiated in the last three years, it has completed about 130 of such projects.