Security beefed up as protest rock National Assembly in…

BREAKING: Buhari’s Hatred For Ndigbo Dated Back To Biafra… 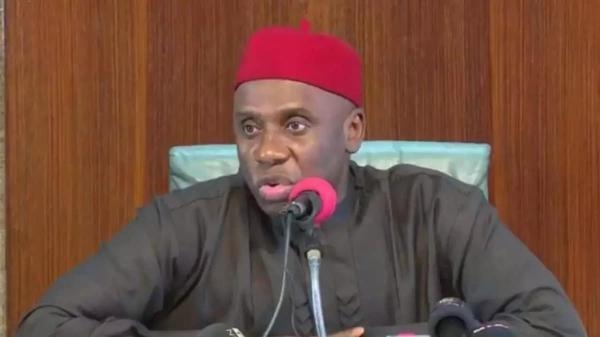 SAHARANEWS – Nigeria’s minister of transportation, Rotimi Amaechi, on Sunday, April 21, pleaded with residents and leaders in Rivers to come together to build a state they can be proud of irrespective of party affiliations.

Amaechi, according to a report by The Nation, lamented that the state is now almost always in the news for the wrong reasons, urging in his Easter message, that Rivers people and other Nigerians should continue to hope for a better country.

“No doubt, our state has endured a tortuous political season, which saw political parties jostle and cajole Rivers people to make choices.

“Our state, which was known and respected as the treasure base of the nation, is now almost always in the news for the wrong reasons. This is not the Rivers state of our dreams.

“We must find our way back to the path of a glorious future. I am one of you, therefore, as your father, son and brother, I beseech you to be of good courage and join hands to build and restore the glory of our state,” he said in the message.

The minister added that the season should be a time for sober reflections for the people of the state.

He appealed to the residents to ask God for forgiveness and mercy for all the things done or left undone.

He also urged for prayer for the pain and anguish that the citizens have suffered, most of which he said are unreported.

“The persistence of gang violence, kidnappings and killings in parts of the state has dealt a telling blow on the psyche of the people. People no longer feel safe or sleep with their two eyes closed.

“For those of us who feel a sense of personal loss, as a result of the last electioneering in the state, I say do not despair, you have vital work to do in the Rivers project. Believe me with wisdom and patience, you will own the future.

“Always remember that the task of enthroning a party into power is not as high a calling of patriotism than the task of making personal sacrifices for the peace and general good of the state,” he said.