Insecurity not only in Nigeria, other countries are also… 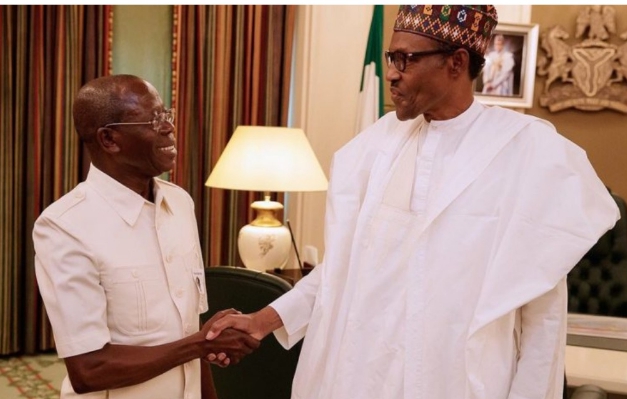 SAHARANEWS – The intense politicking of who becomes the next Senate President may have finally been resolved, as the ruling All Progressives Congress (APC), Monday night picked the current Senate Leader, Ahmad Lawan for the position of Senate President in the incoming ninth assembly.

SaharaNews reports that the selection came at a meeting President Muhammadu Buhari had with APC Senators-elect at the Presidential Villa, Abuja.

APC National Chairman, Adams Oshiomhole with President Muhammadu Buhari
Lawan, a ranking senator from Yobe state, was the preferred candidate of the APC in 2015, but Bukola Saraki, with the support of the Peoples Democratic Party senators, dribbled the party to emerge senate president, a scenario analysts say may be replayed if the APC fails to put its house in order.

ALSO READ:  The ‘Circus’ Of Death

The meeting, SaharaNews earlier reported, was to strategize on the zoning formula for the leadership positions in the incoming ninth assembly, particularly the upper legislative chamber.

In attendance were the National Chairman of the APC, Adams Oshiomhole, Secretary to the Government of the Federation, Boss Mustapha, APC Senators-elect and 11 serving governors of the party.

Also in attendance was the Anambra South Senator-elect, Ifeanyi Ubah, of the Young Peoples Party (YPP).

SaharaNews earlier reported that Ubah announced his defection to the APC at the meeting which held last night.

At the meeting which lasted for about two hours, Oshiomhole announced the selection of Lawal in the presence of other Senators-elect, including top contenders for the Senate Presidency position.

A serving senator of the ruling party from Katsina, Senator Bello Mandiya equally confirmed that the party had picked Lawan to succeed Bukola Saraki.

He also hinted that other contenders have started lobbying for other available positions in the Senate, since the leadership of the party have made known their stance.

Another Senator-elect, while supporting Mandiya’s earlier statement, added that President Buhari is in support of the party’s position.

JUST IN: Ifeanyi Ubah Reacts To Reports Of His Defection, Says He Will Not Be A Cheap Senator