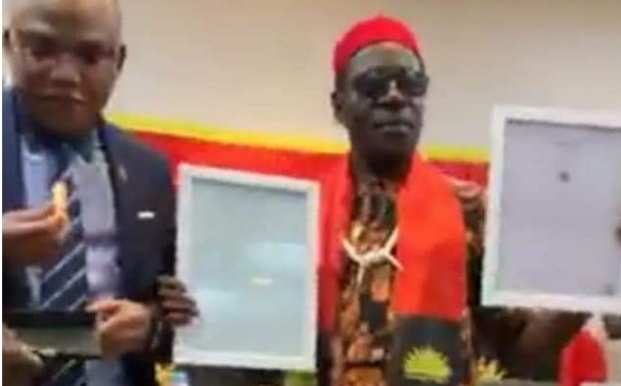 SAHARANEWS – It is heartwarming to state here that the Indigenous People of Biafra (IPOB), has officially been recognized and registered by the Japanese Government. The IPOB leader, Mazi Nnamdi Kanu himself, received the authorisation certificate from the government.

Family Writers Press International, has presently obtained a report about the presentation of the certificate to Mazi Nnamdi Kanu, fully confirming the registration of Biafra as an entity in Japan.
We had few days ago, reported the arrival of Mazi Nnamdi Kanu in Japan, heralding his emergency meeting and crucial diplomatic mission in that powerful Asian country, towards the total restoration of the sovereignty of the nation of Biafra.

Recall that in the past few weeks and days, the IPOB leader visited the European Union parliamentarians in Brussels, Belgium and United Nations officials in Geneva, Switzerland, where he respectively, tendered official reports pertaining relentless and despicable spate of challenges Biafrans have been through in the hands of the Fulani oligarchical Nigerian government.

“The Indigenous People of Biafra (IPOB), had since inception, gone through all forms of inhuman and degrading treatments which include: illegal arrests and detentions, killings during peaceful and rightful demonstrations on the streets of Asaba, Aba, Onitsha, Enugu, Abakiliki, Yenegoa, Igweocha, Umuahia, etcetera”, an activist angrily stated.

Meanwhile, we gathered that during the meeting between the Japanese officials and Biafrans on Sunday 22nd September 2019, the IPOB leader, Mazi Nnamdi Kanu was duly and officially presented with an Officially Sealed Certificate from the Government of Japan, fully recognising the Indigenous People of Biafra as an entity in the country.

It is noteworthy to state here that IPOB as a civilized and disciplined freedom agitating mass movement globally, has also been fully registered and recognized in Germany, Spain, United States of America and Israel amongst others

“If They Became Busy, They Will Abandon Nnamdi Kanu And Biafra Agitation Will Die A Natural Death” – Lai Mohammed